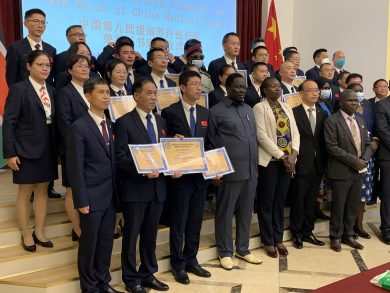 The tenth batch of the Chinese medical team has arrived in South Sudan to conduct a one-year medical mission in the youngest nation.

“First of all, I want to appreciate 9th batch of China’s medical team for the good work they have done and the services they delivered to our people in South Sudan,”  Akol said during the farewell ceremony of the 9th  batch of Chinese doctors in Juba, the capital of South Sudan on Wednesday. The 15-member team of the tenth batch of doctors that arrived in Juba on September 4th is composed of 13 different departments such as Gastroenterology, general surgery and dermatology.

“In the past two years, a total of 126 medical personnel have been brought to South Sudan offering free medical competition and treatment for 22,507 patients and performed more than 1,000 operations of various kinds of diseases,” Ma said.

Ma disclosed that ninth batch of Chinese doctors have also offered medical out-reach services to more than 25,000 patients in the suburbs of Juba since in September 2021.

“We have carried out 17 free medical outreach events in remote areas outside Juba and providing outreach medical services to 25,534 patients,” Ding Zhen, head of the departing 9th batch of Chinese medical team said.

He added that the team also conducted over 100 surgeries and treated about 11,800 patients.

“In the past year, we have offered medical consultation and treatment for 11,800 patients and performed about 100 surgeries and conducted Traditional Chinese Medicine diagnoses and treatment to around 2000 patients,” Ding said.

“We are willing to use our knowledge to save each patient here in South Sudan, to try our utmost effort to cooperate with local counterparts to fight against any disease,” Xu said.

Chinese medical doctors have been treating patients and also training local doctors over the years since the independence of South Sudan in 2011.