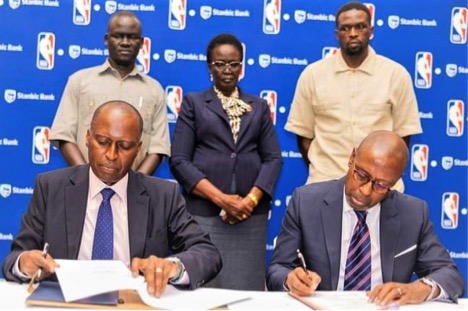 Stanbic Bank and the National Basket Ball Association Africa have signed agreement aimed at developing basketball sport for boys and girls under the age of 16 years in South Sudan.

“This partnership will see the league harness the skills of South Sudanese boys and girls under the age of 16 years old, and is designed by the NBA to engage the youth in basketball,” Andrew Murugu, the Country Head for Stanbic Bank in South Sudan, said during press conference at Radisson Blu Hotel in Juba on Thursday.

George Land, the Head of Business Strategy and Operation for NBA Africa, said that the partnership will help popularize the basketball game in the country.

“What we are doing is to make basketball accessible around the country for kids and others who have interest in the game,” Land said.

“In South Sudan, we will be doing junior NBA for less than 16 years they will be able to compete, and the wining team and players would compete in Africa and subsequently compete in the world,” Arek A.Deng, the Chief Executive Officer for Luol Deng Foundation said.

“South Sudanese are body built for sports and not only in basketball but also in football, volleyball, and athletics and even in chess,” Nyandeng said.

Dr. Albino Bol Dhieu , the Minister of Youth and Sports called on private investors to invest in sports and entrepreneurship.

“We need to engage the youth in two aspects, youth in sports and youth in entrepreneurship. This will allow youth to flourish and harness their skills and talent,” Bol said.