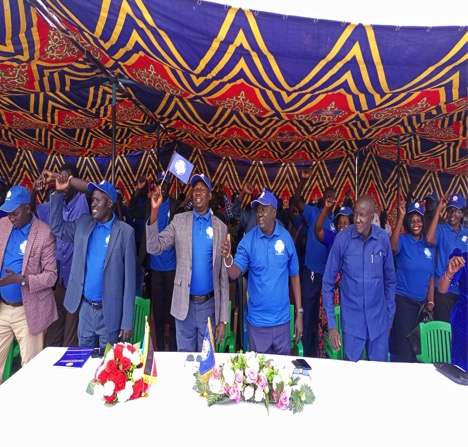 Sudan People’s Liberation movement in opposition SPLM-IO party Launched its first ever Membership registration yesterday in unity state in an event attended by more than 1,000 participants including members of other political Parties such as OPP and South Sudan opposition Alliance SSOA.

The Unity state’s party secretary general Cde William Gai Riak said that the membership registration program is for purposes of determining the popularity of SPLM-IO in the state and to share ideas and views toward democratic leadership.

“Our objectives for launching the membership registration program are because we want to know how popular SPLM-IO is in the unity state and also to share about the implementation of South Sudan peace agreement.” Gai added.

“Today in this program, the SSOA Unity state leadership urge SPLM-IG and SPLM-IO to stop confrontation each other to prevent unfortunate incidences similar to what happened in Leer, Koch and Mayendit County.”he cautioned

Machar added that all warring parties are fully committed to the South Sudan peace agreement in good faith and will work according to peace implementation guidelines.

The SPLM-IO Unity state chairman and deputy governor of unity state Tor Tunguar Kueiguong appealed to SPLM-IO members to stand for lasting peace so as to end suffering of civilians in the state.

“What happened in South Sudan between 2013 and 2016 was enough and enough is enough, the negative parts of South Sudan crisis is that civilian sufferers a lot,” he sympathized.

On the other hand, Unity state youths’ union appealed for immediate implementation of the revitalized South Sudan peace agreement by parties concerned to end violence in South Sudan.

Mr. Kalany Bolis Kueth 37, urged SPLM-IG, SPLM-IO, SSOA and other political parties to speed up implementation so that forces are graduated within time.