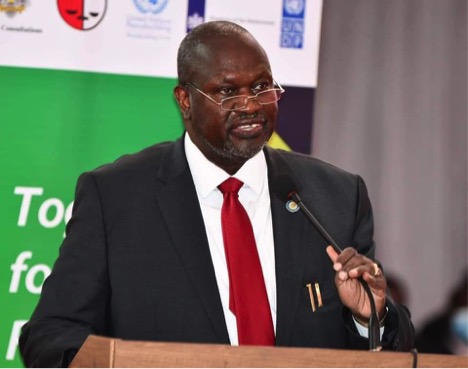 Machar said the nationwide registration drive aims to prepare the opposition party in the current transitional unity government for participation in upcoming national elections slated for 2023.

“People should not register at random, political parties do not necessary need to have millions of members,” Machar said during the launch of membership registration at the SPLM-IO party secretarial in Juba.

“We need strong cadres and we do not need to register soldiers, police, prison, wildlife and fire brigade and security in our party,” he disclosed.

“The (peace) agreement remains valid, remains important yesterday, today and even after six months as long as it is implemented in letter and spirit,” Oyet said.

“We shall never throw the agreement which is meant to transform this country away,” he added.

Lawmakers subscribing to the SPLM-IO last months boycotted participating in sittings in the Transitional National Legislative Assembly (TNLA) over the decision by the SPLM-IG led by President Salva Kiir to increase the number of registered members of political parties from 300 to 500 members.

The 2018 revitalized peace agreement calls for the number of registered party members to be 300 in each state.

Regina Joseph Kaba, the SPLM-IO Interim Secretary-General, said the registration exercise aims to prepare the party for registration with the Political Parties Council.

“Now we are in the process of registering our members and preparing our documents, so that we will be ready for registration of our party when the time comes,” Regina said.

Regina alleged that the dominant SPLM-IG aims to weaken it’s rivals ahead of the upcoming national elections by increasing the number of eligible party members at state level.

“We need to promote multi-party (political) system and when we say we stand with 300 it does not mean that we don’t have members,” Regina said.