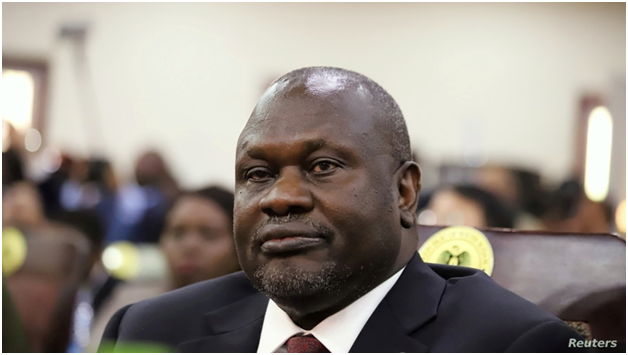 South Sudan is working towards resolving Africa’s worst crisis of the decade and ushering in a new era of democracy but plans to thwart those programs, and kick out the government still remains high on the agenda of foreign actors, a lead politician warned.

The regime change rhetoric is being reawakened by recent political developments in the country.

A “foreign agenda” remains high on the wish list to topple President Salva Kiir to pave way for plunder of the resources in the country, Gen. Salva Mathok Gengdit said.

A group calling itself the People’s Coalition for Civil Action (PCCA) has designed plans to protest against the transitional government across South Sudan and the Diaspora, saying the leaders had failed, become dictators and must quit.

The protest, according to them is set for August 30.

“This coalition is a real foreign agenda for regime change and that will not work,” Gengdit told Juba Echo in an interview.

A group under the South Sudan women has also issued agitating statements while the Red Army, a pro government organization has ceased working with the ruling government.

“Most of these issues are biased, they don’t have a basis,” Gengdit said.

“South Sudan has resources and the policy on Africa is very clear. This is a foreign agenda, actually being done to get rid of the current government,” he said.

“Yes, there are mistakes that we have committed, like letting corruption take toll in the country, it’s a mistake and the peace government is the beginning to make things right again.”

Abraham Awolich, a member of the People’s Coalition for Civil Action, warned in a recent statement that South Sudan’s “leaders have only given us war, misery and suffering and economic meltdown.”

The Red Army for its part has an internal party problem, but one which highlights a bigger leadership issue.

It is accusing the ruling SPLM of sidelining them from any decision making process within the party and therefore announced to cease working with them.

Gengdit described the Red Army as a bush war plan designed to ensure children who were part of the rebellion be organized for formal education.

He said the Red Army ceased to be with the 2005 comprehensive peace agreement and that continuing to maintain such an organization is a “mistake.”

All these problems come at a time when the main opposition party, the Sudan People’s Liberation Movement in Opposition led by First Vice President Riek Machar is having a huge leadership crisis, pitting his former chief of general staff, Gen. Simon Gatwech Dual in a rebellion against him.

Dual and his group claim Machar and a group of cronies are bent on positions in the government and care less about implementation of the peace agreement in South Sudan.

“In three years they have only implemented Chapter I, basically dividing jobs,” Mabior told Juba Echo in an interview.

He was referring to chapter one of South Sudan’s peace agreement which deals with power-sharing among the signatories to the pact.

“They focused only in ratios for power sharing and even started dividing positions which were not mentioned in the agreement,” Mabior said.

“The entire reform agenda has been neglected. The security sector reform must come first for meaningful implementation of the other reforms.”

But Gengdit believes the plan to reform the security sector has been partly slowed by the group Mabior belongs to now.

“The delay of the security arrangement came from the IO itself. The IO chief of General Staff and his deputy where supposed to be in Juba a long time to complete the program but they refused to come and now have chosen to rebel,” Gengdit said.

“Second delay is that the SPLA went to the assembly areas with their guns, including the mounted guns but the IO went to cantonment without guns, making things difficult,” he said.

“If we are to graduate and amalgamate people without guns, how can we deploy them?”

Gengdit also castigated the arms embargo slapped on South Sudan by the United Nations Security Council for failing the security arrangements in the country.

“There is no way to bring guns for these people because South Sudan is under embargo,” he said.

“If the arms embargo is lifted now, President Salva can have a way, even take guns on loan so that these people are graduated.”