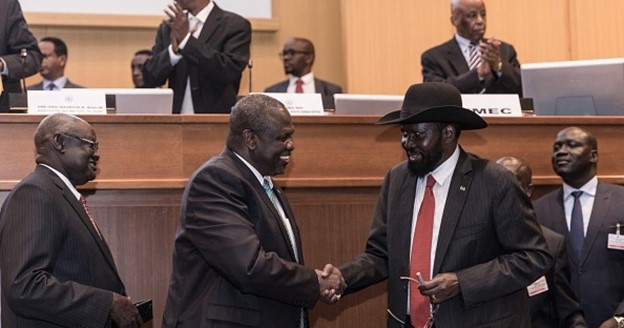 South Sudan’s peace monitoring body, Joint monitoring and evaluation commission has appealed to the parties to the agreement to amplify their effort in implementing the remaining provisions of the peace deal.

In a press statement issued over the week, RJMEC urged parties to bear in minds that serious assignments in the road map requires confidence and trust building to accomplish.

“As we smear the fourth year of the peace agreement, RJMEC urges RTGoNU to intensify its efforts in implementing the roadmap fully both in document and spirit while bearing in mind that more confidence and trust is needed without sidelining inclusivity and protection of political and civic space for all South Sudanese to participate in their governance.

They further applauded the principals of the parties for keeping their promises of not taking the country back to war unlike in 2016 where war broke out within a year after signing the peace agreement and less than two months of the formation of coalition government.

In contrast, implementation of the R-ARCSS is now entering its fifth year, and the Revitalized Transitional Government of National Unity (RTGoNU) is over two-and-a-half-years old without any major ordeal in its implementation proceedings.

According to R-JMEC two achievements in the recent past in the implementation of the peace deal has been met which are; graduation of the first batches of unified force and the recognition of the road map guiding transitional period to election

“Firstly, the graduation of the first batch of the unified forces. The second notable event is the vote by the RJMEC members to extend Transitional Period by two years, such that it expires in February 2025 with the conduct of a legitimate election.” Reads the statement.

However, the peace monitor expressed concern over insecurity and intercommunal conflict in the country and urged the parties to address this quickly so as to save the country from losing the gains it has achieved in its struggle for peace so far.

RJMEC reminded the RTGoNU to deliver the core of Revitalized Peace Agreement of founding a united, peaceful and prosperous society based on justice, equality, respect for human rights and the rule of law.

The peace monitor also urged the parties to deploy the graduated forces and immediately embark on Phase II of the unification exercise.

The parties to the agreement signed a fresh roadmap in August 2022 increasing the lifespan of the transitional period for another 24 months to allow the execution of important components of the agreement which remained untouched until the end of the previous contract.