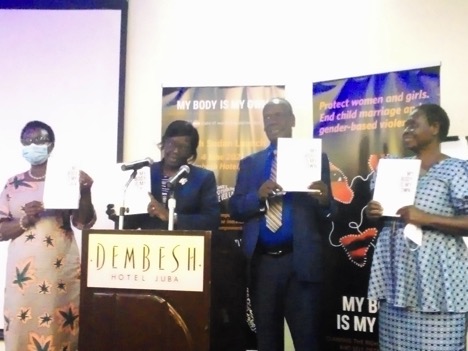 The Minister for Gender, Child and Social Welfare has urged the newly reconstituted parliament to pass the Gender-Based Violence Bill into law.

Warrille was speaking on Friday, during the launch of the State of World Population Report at Dembeshi hotel in Juba.

The global report issued by the UN Population Fund (UNFPA) tackles prevailing and emerging issues of concern to countries and governments worldwide.

The theme of the report this year, 2021 is “My body is my own: Claiming the right to autonomy and self-determination”.

Warrile said that the report, comes at a time as the national parliament prepares to embark on enacting legislative laws, and policies that will guarantee men and women power to make choice over their own bodies and future without violence.

“Certain cultural practices, are deeply rooted in the notion that value our girls and boys differently, they are devastating for women and girls’ health and well-being. All these are critical to ensure that women and girls have right over their own bodies and are not subjected to violence,” she said.

“For many people but especially women and girls, life is fraught with violation to their bodily autonomy and integrity,” said Otieno.