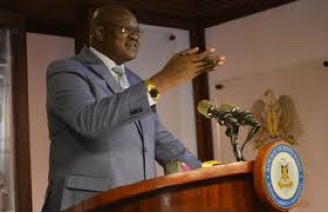 A technical team is soon finalizing work and after which parliament will take oath, Ateny told Juba Echo.

Ateny said President Salva Kiir was only waiting for the final report from technical committee tasked to review the nominees’ lists from all the parties.

“The current reconstituted Parliament will pass the Fiscal Year budget in July. It will also start overseeing other national vital issues including Permanent Constitutional-making process”, he said.

Ateny said the President will also officially preside over the swearing in of parliamentarians as soon as the reviewed list is presented to him.

According to Ateny, the parliament is also expected to oversee the on-going constitution making process among other national issues.

Ateny said the ongoing delay is due to technical committee’s commitment in trying to rectify recent nomination list of the MPs.

The technical committee is working on the nomination lists to rectify errors and the list will be announced as soon as possible, according to Ateny.

He also attributed the delay to lack of reached consensus among the parties to the peace agreement.

He further assured public on possible rectifications in the near course.

Asst. Prof. Abraham Kuol Nyuon, a Juba-based Political Analyst said there was a looming impact on citizens since there is no functional parliament even in the states.

He said that there was a need to monitor the executives and other institutions to account.

“Citizen will continue to suffer in the executives’ hands. There is no check and balance if there is no functioning legislature to do that”, he said.

Mr. Nyuon added that the citizens’ suffering was demonstrated by the inter-communal clashes in the states, adding that such crimes need legislators to work closely with executive to diffuse such tensions.

“Executives cannot work alone without legislators who are deemed to make bylaws. The legislators presence can curb crimes in those states paralyzed by inter-communal violence among other crimes”, he added.

It is not clear when exactly the Technical Committee led by Tut Gatluak Manime will present its report to the President. The process will allow the parliamentarians to take oath, according to Ateny Wek, the Presidential Affairs Press Secretary.