One sunny afternoon in October 2009, in Juba’s outskirt of Munuki, the family of Victor Gbolo Scopas was blessed with a blossoming baby girl.

“My comedy is basically to put a smile on the face of people who have been suffering in the war,” Kiden told Juba Echo in an interview.

Known as “comedian Kiden” she has walked the breadth and width of social centres in Juba singing rhymes of peace that comes with jokes that spectators simply can’t resist laughing.

Kiden’s comic nature was only realised by her uncle, Johnson Juma Weneko, a journalist by profession in 2019.

And by 2020, she took the country coming out of war by storm, putting smiles on her countrymen and women worn out by the traumas of war.

“I was joking a lot in my neighbourhood and my uncle told me I am a comedian,” Kiden said.

“I was surprised by the new word because I never knew what comedy means” until it was explained to her, she said.

Kiden is now 12 years old and much more optimistic to use her comedy as part of peacebuilding in South Sudan.

At that tender age, she must juggle between her duties at home, school, playing with her mates and hosting comedy shows.

Despite the challenges the juggle can bring to an underaged girl, Kiden is optimistic that she has laid the foundation for her future.

“I want to continue comedy and make people laugh even if on the education side, I want to be a doctor when I grow up,” she said.

Comedy as bridge-builder in conflict

Comedy can help people cope with the impact of conflict, and be used as a tool for building bridges across the conflict divide.

Humour helps them survive in the midst of conflict and it is a way to cope with trauma and even remain sane in the face of tragedy.

Using humour as a tool in peacebuilding can find those absurdities and breakthrough barriers between ethnic or religious groups.

The African nation is struggling to return to peace from a crisis which began in December 2013, leaving 400,000 people dead, displacing four million others and slashing the main revenue source, crude oil, leading to economic decline.

In September 2018, a peace deal was reached between warring parties, subsequently leading to the formation of a unity government billed as the best chance for the return of peace in South Sudan.

Comedian Kiden wants to use her comedy to ensure people from all walks of life in South Sudan come in unison and laugh away their stresses together.

And it works. Her fans include politicians, business people, youths, and the elderly among all others. Hits that have rocked South Sudan include “village kids in town” which is a bi-monthly series, “kids are intelligent” and “bring anything,” and they have turned into household peace jokes.

“I am a South Sudanese just like everyone else in this country so I want to use comedy to bring laughter in the face of people and peace in their hearts,” Kiden said.

Kiden’s cause is helped by parents who understand her vision for a peaceful South Sudan.

“They allow me to go and do my comedy but always my uncle takes me,” she said.

“They tell me that I must always protect myself too.” 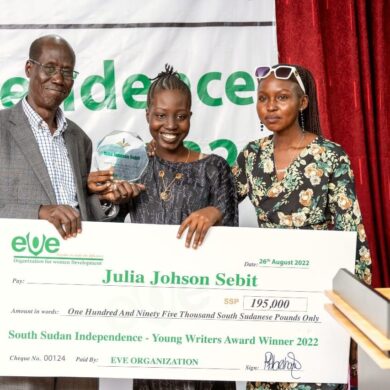