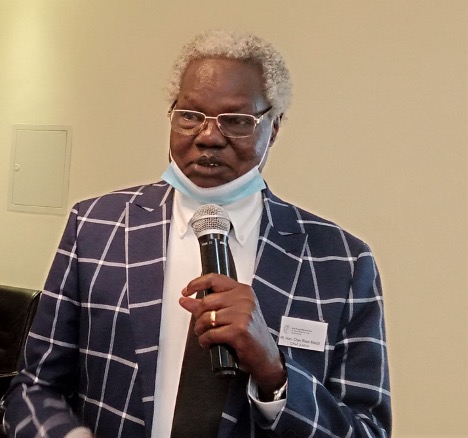 The republic of South Sudan needs a judicial system which is autonomous and free from all political influences, chief justice,Chan Reec Madut told journalists on Monday from Royal Palace hotel while opening a one-day symposium for judicial reform committee members.

“we are a new country and the experiences of other countries will benefit us as we  hope to see a reformed judiciary far away from political influences, what our people need is an independent judiciary,” said Madut.

The South Sudan’s judicial reform committee is supported by Max Planck Foundation and the European Union to mold institutional capacity of the judiciary and the judicial infrastructure under the leadership of James Ogoola who is deputized by Joyce Aluoch.

Kathrin Maria Scherr, the managing Director of Max Planck Foundation revealed that judicial reform is crucial because a good justice system has a capacity to bolster an effective governance.

“Judicial reform processes are recurrent story in many countries worldwide, the need to examine the country’s judicial structure, its effectiveness and institutional setup are healthy exercises in any nation,” Scherr publicized.

She added that, improvement made in justice system have a direct impact on the people and it is a fundamental aspect of the way in which our societies are governed.

In the same vein, Christian Bader, the ambassador for the delegation of European Union to South Sudan on his part implied that the demand for reform in South Sudan’s justice system is not a pressure from international community but an expectation from the people of South Sudan.

The special envoy for Intergovernmental authority on Development to South Sudan Ismail Wais, said that the revitalized peace agreement calls for a reform in the judiciary adding that a well-designed reform in the judicial system will concretize a foundation for not only a united South Sudan but also pave way for lasting peace that has since been evasive in the country.

“The revitalize peace agreement hopes that undertaking a comprehensive and far-reaching judicial reform in the country will lay foundation for democracy and united South Sudan that is based on equality, justice and respect for human rights as well as rule of law,” Wais recalled.