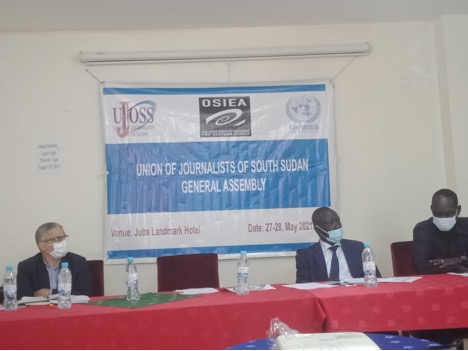 South Sudan’s journalists to elect their new leader on Friday

The Union of Journalists of South Sudan is set to elect their Alliance’s new leader on May 28, 2021 as the General Assembly convened on Thursday.

The gathering has brought journalists’ representatives across different states in the country.

Dr. Yak Awan Yak, the Undersecretary for the Ministry of Information, Communication and Postal Service affirmed the Ministry’s support for media as the fourth estate to gain equal power within three government’s pillars.

“Many people may not understand that media as the fourth estate also have equal power with other government’s pillars namely executive, legislature and judiciary,” he said.

The official encouraged the journalists to contribute to country’s development by shaping their readers mindset for positive change.

“Let’s the articles journalists write have a positive impact on the society and this is nation building in its socio-economic and political as well,” Dr. Yak said.

He reiterated the government support in providing safe environment for a democratic and free pluralistic media in South Sudan.

Arnad Royer from UNMISS Human Right Division urged the union of journalists to extend its collaboration to all the states by reaching out to the local journalists.

“I urged Union to engage other stakeholders and collaborate in protecting their journalists”, he said.

Oliver Modi, the outgoing Chairperson said it was high time for journalists to elect their new leader after he has served for the last few years.

The two-day event was organized by the Union of Journalists of South Sudan through a support of the United Nations Mission in South Sudan to convene a General Assembly.