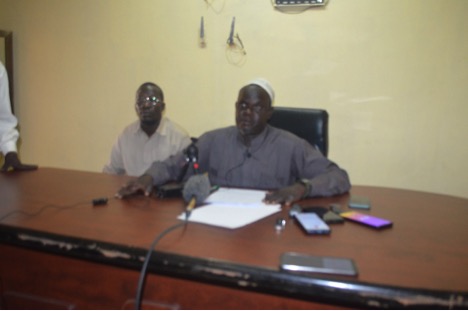 South Sudan Islamic council have dragged  Juba city council  to court regarding the ownership of a plot of land labelled as Markaz Alwaz Plot No’ A.B 3rd class reportedly designated to Islamic Council since 1972.

Sheikh Jarelnabi Khamis Marsal on Tuesday told reporters during a press conference that some individuals within the City Council Administration divided the land among themselves and rented it for shops to over 40 foreign traders. “There are individuals in City Council benefiting from this land which was allocated to Islamic Council back then because they have rented it out to foreign trader”, he itemized.

Sheik Jerelnabi revealed that they have formally lodged a case with Juba County Supreme Court and expressed fear that Juba city Council authority might use their power to abscond court hearing.

“We opened a case against these people in Juba County Supreme Court and they may use their political power to abscond court hearing. We have a classic documents of that land registered since 1972 and we wanted to solve this amicably without tarnishing the image of our government”, he added.

Meanwhile, the Deputy Secretary General of South Sudan Islamic Council called upon the leadership of the Country to advise Juba City Council administration to refrain from their religious affairs and properties.

“I call on the leadership of this Country to intervene into this land dispute because our Constitution provides for freedom of religion and there are provisions that protects everyone and their property,” he remarked.

Efforts by this publication to obtain comments from Juba City Council officials were in futile as all attempts made to reach them did not succeed.

In 2020 the President of the Republic of South Sudan formed a high-level committee consisting of the legal advisor to the President, ministers of National Security, Justice and Constitutional Affairs and that year, the president asked Juba City council to relinquish the land in question.