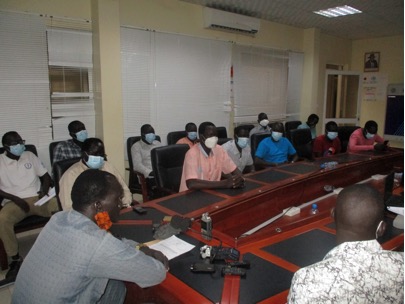 At least over 250 frontline health workers responding to coronavirus pandemic in South Sudan have laid down their tools as of May 27 over government failure to pay their nine months arrears.

Moch John Mabior, the Head of Workers’ Union at Public Health Emergency Operations Centre (PHEOC) told the reporters in Juba on Thursday that they will only resume work if the government pays their incentives.

“We are laying down our tools and nobody is going to work until the government pays our nine months incentives,” Mabior told the reporters during a press conference.

According to the workers’ Chairperson, the government has shown a callous disgrace for their health and safety in the line of duty.

“Healthcare workers are soldiers that fight sickness and for that matter, we need to be insured but there is no insurance and we need to be covered especially by providing some risk allowances but this is no the case,” he said.

Abraham Ajok, one of the health workers during the conference revealed that the strike would affect the daily COVID-19 updates, urging the public to adhere to COVID-19 preventative measures.

“For the cases confirmed in the last two or three weeks, we may not be able to follow up to know their conditions,” Ajok added.

The frontline workers worked said they have worked for nine months from September 2020 to May 2021 without a single payment.

Each health worker is supposed to receive 2,500 United States dollars per month, according to their last year’s agreement with the Ministry of Health which is yet to materialize.

Dr. Angelo Goup Thon, the Acting Director at the Public Health Emergency Operations Center, who is also a Chief of Operations for coronavirus response at South Sudan’s Health Ministry, said he was aware of the frontline health workers’ complaints, though he didn’t receive any strike’s official communication by Thursday morning.

The health professional disclosed that he was in talks with the Ministry’s top officials to coordinate the workers’ payment as soon as possible.