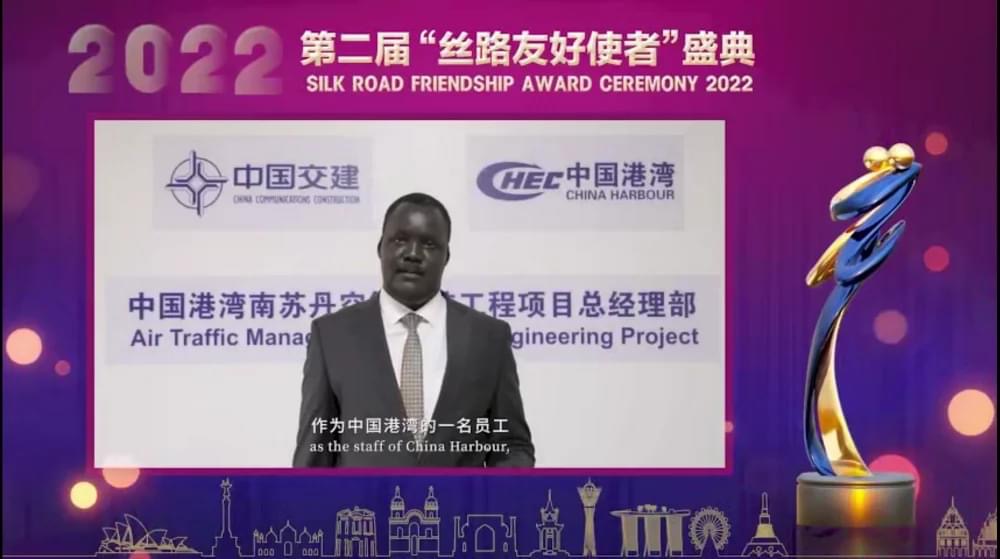 Congratulations to Athuai Deng Akok, the 38-year-old South Sudanese who was awarded title of “Ambassador of Silk Road Friendship” , the only award winner in Africa!

Athuai Deng Akok, Business Manager of South Sudan Branch of CHEC was regarded as a hero. His story tells how friendship between countries lies in the affinity of the people. In December 2013, an armed conflict broke out in Juba, capital city of South Sudan. A number of firefights occurred at a location near the CHEC’s branch. Worrying about safety of his Chinese colleagues, Athuai Deng Akok helped them arrive at Nimule amid gunfire, a small town more than 170km away from Juba, near the border between South Sudan and Uganda. Risking his own life, Athuai Deng Akok returned alone to the office and stayed there for 3 months, safeguarding the company’s equipment and assets from robbery and damage. Under his protection, the company site maintained intact and CHEC’ s loss was minimized. Since joining CHEC more than 10 years ago, Athuai has played an active role in the construction of Juba International Airport Phase I Project, South Sudan Air Traffic Management System Engineering Project and other projects, and has contributed to the promotion of China-South Sudan and China-Africa friendship.

The award speech goes, “Amid gunfire, he resolutely headed for the direction opposite to others’. At work, he was the guardian for the China-South Sudan cooperation project. Though reticent, his body is full of great energy. Honest and reliable, he conveyed the message of trust in China-Africa friendship.”

Themed on “Telling the stories of Belt and Road Initiative participants”, out of over 100 candidates worldwide, 12 individuals and 1 group were awarded the honorary title of the Ambassador of Silk Road Friendship. These recipients are from over 10 countries in Asia, Africa, Europe, Oceania and various fields including politics, economy, health care, infrastructure, sports, arts, etc. They shared their stories and their representation proves that the Belt and Road is a path of peace, prosperity, inclusiveness, innovation and civilization. These Ambassadors of Silk Road Friendship in the new era have promoted hard, soft and heart-to-heart connectivity among countries along the “Belt and Road”.