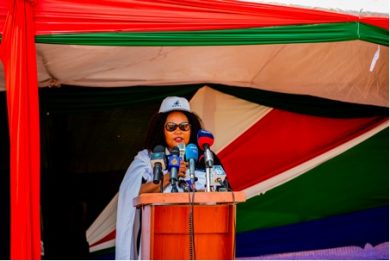 Minister of Environment and Forestry speaks at the resumption on Block 5A in Tharjiath. Photo by SPOC
Home
News
Juba Echo·
News
·2 years ago·1 min read

South Sudan will expel oil companies who operate in total neglect of the effects of oil pollution, the Minister of Environment and Forestry, Josephine Napwon, warned.

Environmental reports from oil producing areas have pointed at massive pollution affecting communities and livestock but oil companies have not paid attention, Napwon said in Tharjiath, Unity State on Monday at the resumption of production in Block 5A.

Block 5A is operated by Sudd Petroleum Operating Company Ltd.

“In these areas the oil is being produced, our women are dying, our children are being born deformed, our youth are dying and there is a lot of pollution in this area,” Napwon said.

Oil companies must cooperate in getting solutions “into this environmental pollution and anybody who will not cooperate, as the government of South Sudan, we will not hesitate to stop you from operation, and take my words very seriously,” she said.

“I don’t think you are the only company in the world which can do the oiling.”

Napwon noted that environmental protection should always be the first priority of the oil companies.

The Deputy Managing Director of the government-owned Nile Petroleum Corporation, Stanslaus Tombe noted Block 5A resumption as “a new era in South Sudan” but cautioned SPOC on paying attention to the environment while exploiting the block.

“Do not get excited after eight years and produce causing negative environmental leakages,” Tombe said.

“For us to be successful, we have to make sure we do the right thing.”