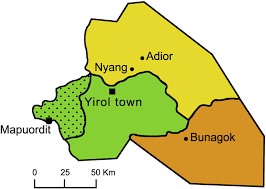 A 13 year-old school girl identified as Rebecca Ajak Awaker Majok has committed suicide in Yirol East County of South Sudan’s Lakes State after a quarrel with her parents.

The School has declared two days of mourning following the incident on Wednesday.

“She decided to leave home without notice to family members after a quarrel,” said Laat Achol, the Deputy Head Teacher at Nyang Girls Primary School in Yirol.

“I am deeply sad and very shocked to witness what happened at the scene. We found her up the tree where she hanged herself,” he said.

The school official, who is also a deceased family member, said the deceased had a quarrel at home before sneaking out of the house on Wednesday.

The body was recovered about eleven miles away from the home.

Maker Wetnhial Mamur, the Police investigator in Yirol confirmed the incident to Juba Echo on Thursday.

“It is true that a teenage girl committed suicide, I witnessed it.  She hanged herself from the tree and we have already compiled our comprehensive report based on assessment made,” he said.

Wetnhial said the deceased was buried under the spot she killed herself.

“I declared the School closed for two days to mourn our beloved pupil. We stand in solidarity with the deceased family,” he said.

This is the second time in a year for such incident to occur in the same area, police said.