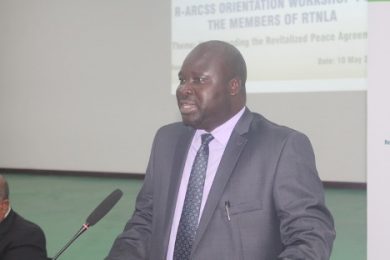 The First Deputy Speaker of parliament has warned the country risks returning to another conflict if deep lying grievances are addressed by the transitional unity government.

Nathaniel Oyet Pierino, made these remarks during the orientation workshop for members of parliament in Juba on Tuesday.

“Any critical objectives of the peace agreement is to address the root causes of the conflict. By addressing those social-economic and political factors that promote conflict in South Sudan,” said Oyet at the meeting organized by the Reconstituted Joint Monitoring Evaluation Commission (RJMEC) in Beijing Hotel.

He warned that the country risks reversing into another conflict if the root causes of the 2013 conflict are not addressed.

“Without addressing the root cause of the conflict, South Sudan risks relapse of conflict,” said Oyet.

The SPLM/A-IO splintered from SPLM-In Government led by President Salva Kiir in 2013 after disagreement on the direction the country was heading in.

Several peace agreements have since been signed but have not translated into genuine and sustainable peace.

The United Nations agencies recently revealed that 8.3 million people will face hunger during the ongoing rainy season due to conflict and flooding.