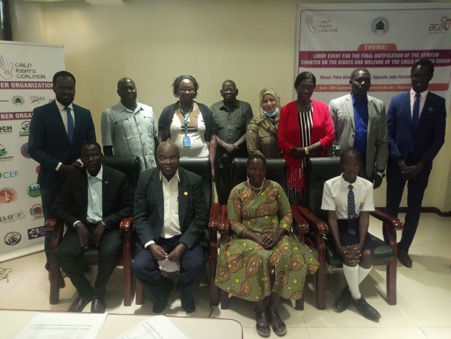 The South Sudan Child Rights Society Coalition is appealing to the government to ratify African Charter on the Rights and Welfare of the Children.

It is also part of the Eastern Africa Child Rights Network established in March, 2014 to coordinate efforts by national Child rights coalition in Eastern Africa in their advocacy for children’s rights in the region.

Speaking during the lobby event for final ratification of the Charter in Juba, Peter Malir Biar, the Deputy Chairperson for the Coalition called on all relevant governmental institutions to support the coalition in campaigning for Charter’s ratification.

“Looking at the ratification, it is one of the things the Coalition has been up to, to making sure that it is signed. The Charter would be able to give opportunities and the chances for our children to have access to their rights,” he said during the closing remark.

It will be part of laws and important institutional document to support our children. We hope that the committee formed is going to be committed to doing this and we hope to work together with committee, he added.

At least about 40 participants drawn from different governmental institutions including the Office of the Vice President for Gender and Youth Cluster Mama Rebecca Nyadeng participated in the event.

Ms. Celina Peter, the Director for Child Welfare at the Ministry of Gender, Child and Social Welfare affirmed her commitment to pushing for the Charter’s ratification.

“In as much as the Country has ratified the United Nations Convention on the Rights of the Children (UNCRC), this is a regional instrument and South Sudan being a member of the African Union, it is incumbent upon this to be able to ratify this instrument so that we make a step further given the fact that the Charter takes into consideration African context and life,” she said.

The Director affirmed readiness to lobbying for Charter whereabout and its ratification through the Office of the Vice President for Gender and Youth cluster.

Prof. Joram Mukama Biswaro, the Special Representative of the African Union to South Sudan, applauded the campaign and called on the rights coalition to extend the campaign to the countryside.

“I was partly involved in drafting this Charter. It Is not a bible nor a Quran, it was written by human beings. So it is to change depending on specific changing circumstances but most importantly it remains an African made by African,” he said.

“The cocktail of the participants is quite encouraging. There are both young and old, but for the morning stars, this is their charter, they have to embrace it and for the sun setters, you shouldn’t defer it, encourage the youngsters to take them to the roots,” Biswaro added.

The people need to be enlightened, what is it all about? They need to understand it. They will be the best disseminators, Ambassador Biswaro said.

He said that the discussion in South Sudan was at the right time since South Sudan is part of the African Union family.

“You should take this to the countryside, I believe it is not confined in Juba or African alone. It should go to Malakal, Tumbura, Torit, Nimule and all those places I have not even mentioned,”

The African Charter on the child welfare was adopted in 1990 by the Organization of the African Unity (OAU) now African Union and entered into force in 1999.

It lays out the responsibilities of the States, the families, the communities and the individuals in the protection and promotion of the rights of the child and is rooted in other human rights treaties, including the CRC and the African Charter on Human and people’s rights (ACHPR).