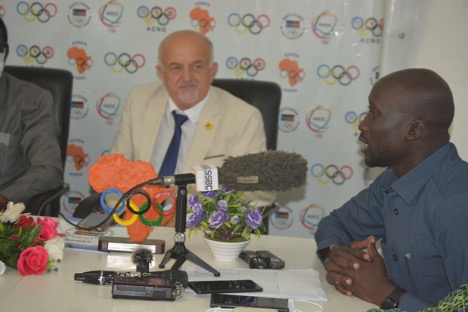 The overall objective aims at implementing sports related projects in the Country.

Mr. Goran Zubic, the foreign investor said he was determined to bringing other donors with similar projects in the country. That would boost youth development and sports related activities.

As he promised to work closely with the government in implementing the pledged project, he said the construction would be undertaken as soon as the government follows up the signed MOU.

“We will rely on government commitment to expedite the MOU implementation. We will catch up with construction soon if possible “, said the investor.

According to Mr. Zubic, he was not only bringing technology to the country but development.

“We will not just bring technology into the Country but expertise to build the capacity of personnel here”, he said.

“These two projects originated since 2019 through the Ministry of Youth and Sport initiative. However, the purpose of this MOU now is to implement these two main infrastructural projects; the Olympic Complex stadium and the National Youth Union Centre”, he said.

The two projects will be spearheaded by Tesela Foundation with support from International Olympic committee, according to the government.

“The investor Goran Zubic will lead the implementation of these projects with help from International Olympic Committee. The construction will begin phase by phase in its implementation”, said Juma.

Gola Boyoi Gola, the Chairperson of the National Youth Union said the project was going to impact the youth positively.

“We have other projects that include; Youth Enterprise development Fund and youth capacity Building project by UNDP but this particular project will enrich the youth”, he said.