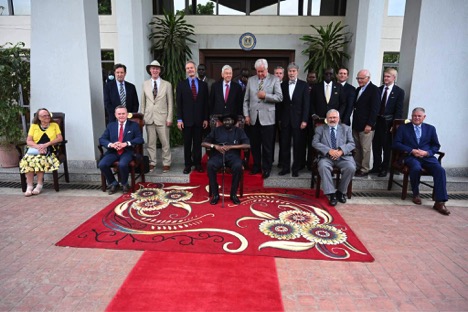 South Sudan’s transitional unity government aware of the biting individual sanctions and arms embargo imposed by the United States since 2017 in the aftermath of outbreak of conflict is now urging a delegation of former Congress men to lobby Washington to lift existing arms embargo and sanctions.

The visiting former Congress team led Mark Deli Siljander who once represented the state of Michigan, said that individual sanctions imposed by both the U.S, UN Security Council and European Union are derailing implementation of the peace agreement.

“We will convey the message to the leadership in the United States in ways it will help the South Sudanese people and the government to move towards peace, stability, prosperity, liberty, and justice,” Siljander said while meeting President Salva Kiir at State House in Juba over the weekend.

Siljander disclosed that they also discussed the need for strengthening bilateral relations between South Sudan and Washington.

“Because we were here from the beginning and we want to change and rebuild our relations into hope and enthusiasm that is why we are here,” he said.

In 2017, the U.S. imposed sanctions on senior South Sudanese officials including military officers from both the government and opposition on the pretext that they were obstructing the peace process.

The UN Security Council in July 2018 imposed an arms embargo on South Sudan due to renewed violence in July 2016 that violated the 2015 peace deal signed to end years of conflict.

The arms embargo was recently extended till July 2023 by the UNSC.