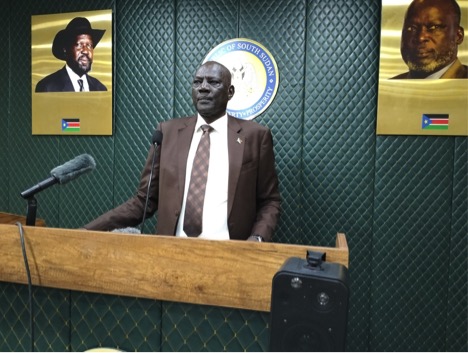 South Sudan’s cabinet on Friday directed the Ministry of Foreign Affairs and International Cooperation to lift the immunity of Charles Dickens Imene Oliha, the diplomat accused of recently raping a woman in New York City.

Michael Makuei Lueth, Minister of Information and Broadcasting, said that the lifting of the diplomatic immunity who recently returned to Juba, the capital of South Sudan will allow law and justice prevail after the New York Police released the latter when he invoked his immunity on August 21.

“It’s a real dismay that our diplomat committed such an offence even if it’s not yet confirmed, as such the cabinet decided that his immunity should be lifted such that the law takes its course, the government is really disappointed and dismayed at the conduct of this official,” Makuei told journalists after the weekly cabinet meeting on Friday.

The New York Post reported last week of the arrest of Charles Dickens Imene Oliha, 46 a career diplomat for having forceful sexual intercourse with a woman in Upper Manhattan.

The Booze filled diplomat addicted to Coors Light drink was usually seen drunk in the streets of his neighborhood leaving his neighbors scared of him.

None of the neighbors could hardly believe Oliha when he boasted of being a diplomat because of his usual bad behavior and passing out often in the streets.

Oliha is confirmed to have returned to South Sudan after embarrassing the diplomatic corps of his country.

The discredited rapist was only saved from the New York Police Department (NYPD) after he invoked his diplomatic immunity card.