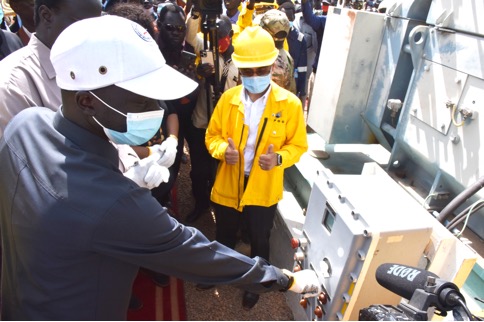 South Sudan has resumed production and export of crude oil from Block 5A in Unity State, a significant statement for peace in a country ruined after years of crisis, officials said.

Former fighters convened in the capital over a year ago vowing to work together in a 3 year transitional government and usher South Sudan into a democratic nation.

The oil block in Tharjiath is managed by Sudd Petroleum Operating Company Ltd, a consortium of Indian and Malaysian companies as well as the government’s Nile Petroleum Corporation.

“This is a dividend of peace,” Unity State Governor, Joseph Nguen Manytuil said at the resumption on Monday.

The crisis which began in December 2013 decimated crude production, and left fields like Block 5A in Tharjiath closed for 7 years.

President Salva Kiir and former adversary Dr. Riek Machar are leading an administration in Juba, expanded to include all former fighters and other disgruntled groups.

They will organize democratic elections at the end of the 3 years to allow South Sudanese choose their next leaders.

Some components of the agreement are behind schedule including the formation of a hybrid court to ensure accountability and reparation as well as a security arrangement that would bring together the former fighters, the foundation for a professional army in the country.

Government blames the delay on lack of revenue. The peace agreement’s sole spending source is the crude oil which production reduced and with lower prices, led to economic chaos in the country.

Benefits in terms of service delivery and infrastructural growth have been stamped out by corruption in the oil sector, according to the Minister of Labour, James Hothmai.

“We have experiences of our cargo going into pockets and it’s very shameful to see the people suffering without roads, water and health facilities,” Hothmai said.

According to Aleu Ayieny Aleu, the Governor of Warrap State neighboring the oil producing region, poor sharing of the oil proceeds played a major role into getting South Sudan into the crisis.

The only way to pacify the country would be to give back to the communities their share of the oil.

“If oil was shared well, we would not have gotten ourselves into this crisis,” Aleu who witnessed the Block 5A resumption said.

“We would not have gone to war if we did not use the future generation funds,” he said.

“There is no way we can bring peace if we do not engage the people and give them their rightful shares.”

Gracing the event was the Minister of Petroleum, Puot Kang Chol who expressed optimism over economic security with more crude oil exported out of South Sudan.

“The resumption to us as a government means economic security, not only to the government of South Sudan but also to the communities in the oil producing region,” he said.