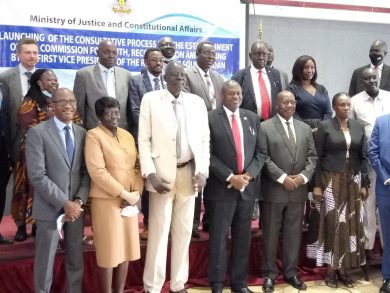 The unity government of South Sudan has established the Truth, Reconciliation and Healing Commission as stipulated in the peace agreement.

The launch, on Wednesday in the capital Juba, was graced by the First Vice President Dr. Riek Machar Teny among other government officials and peace partners.

“I am here to express that the revitalized government has taken serious steps to ensure that the Chapter five of peace agreement is implemented.

“I have to be clear that this is a national process. If it is national process, then we need to make sure that it is credible and transparent to own it,” said Dr. Machar during the launch.

The First Vice President added that it was crucial for people to speak the truth in order to get reconciled and also forgive themselves.

“For people to reconcile, you must tell the truth and tell people what happened because you want to reconcile and get healed after saying out the truth,” the senior government official said.

Dr. Machar appealed to the 25 member technical committee to ensure that they draft final people’s recommendations and send them to Parliament for country to fully reconcile.

“So, we need to double our efforts so that this process can be kicked off by the commission established,” he concluded

Samuel Doe, the UNDP Country Resident Representative said that there was no substitute for Reconciliation with Justice.

“Reconciliation is not a substitute of justice. This commission must not be driven by the elites as what I witnessed in many countries.

“It should be owned by the people themselves especially the victims over perpetrators for speedy healing process”, he said.

“The bodies will independently promote the common objective of facilitating truth, reconciliation and healing and equally with compensation and reparation Authority in South Sudan” he added.

The established Commission comprises of 25 members, 18 from Civil Society Organizations (CSOs) and 7 others from parties to the peace agreement.