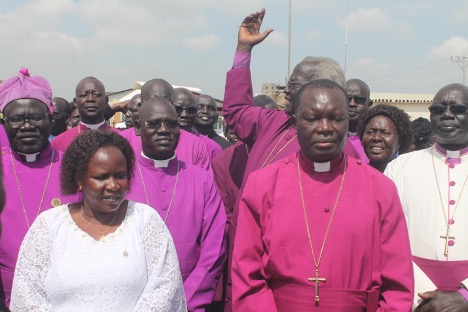 The Anglican Church of South Sudan has joined other countries in rejecting a proposal by the Anglican Communion to endorse a decades-old resolution of “homosexual practice”.

Most Rev. Justin Badi Arama, Archbishop and Primate of the Episcopal Church of South Sudan, said that he and other bishops from other countries rallied against endorsing homosexual practice at the Lambeth Conference in the United Kingdom.

“I raised my voice that we can’t accept the same-sex practice within the Anglican Communion and within the church,” Arama told journalists upon his arrival at Juba International Airport on Tuesday.

The Anglican Communion consisting of 85 million members in 165 countries has been in crisis since 2003 due to disagreement between liberal and conservative clerics over incorporating same sex marriage in the church.

Arama also refuted allegations that he and other African bishops were forced to endorse same-sex marriage.

“That is false, there was nothing like that in every organization and every meeting when you reach the venue you have to register your name and that is what happened,” Arama said.

“It does not mean that we were forced but we were registered for the meeting to receive all the stationary and to have our rooms that is what happened,” he added.

Arama disclosed that they refused to take Holy Communion with gay bishops during the conference in Canterbury.

He called upon Anglican Communion around the world to stand with them in opposing same sex marriage.

The Lambeth Conference took place from 26th July till 8th of August in Canterbury, England.