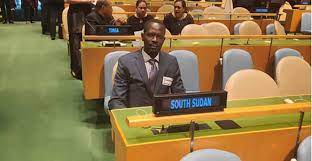 South Sudan’s Ministry of Foreign Affairs and International Cooperation has opened investigations into one of it’s members of the UN Permanent Mission accused of recently raping a woman in Manhattan.

“It is with regret that our diplomat was involved in an alleged rape incident with one of New York City residents. The leadership of the Ministry of Foreign Affairs and International Cooperation took the decision to immediately recall the diplomat in question, pending a full investigation from a specialized committee,” disclosed a statement issued in Juba on Thursday.

The New York Daily reported last week of the arrest of Charles Dickens Imene Oliha, 46 a career diplomat for having forceful sexual intercourse with a woman in Upper Manhattan.

The Booze filled diplomat addicted to Coors Light drink was usually seen drunk in the streets of his neighborhood leaving his neighbors scared of him.

None of the neighbors could hardly believe Oliha when he boasted of being a diplomat because of his usual bad behavior and passing out often in the streets.

Oliha is confirmed to have returned to South Sudan after embarrassing the diplomatic corps of his country.

The discredited rapist was only saved from the New York Police Department (NYPD) after he invoked his diplomatic immunity card.

“As a government we have worked tirelessly since our inception to ensure that the rights of women and girls are protected. The Ministry of Public Service has worked with civil servants across the country to carry out sensitivity training. Beyond ratifying regional and international instruments for the protection of women and girls, we have also worked to receive direction from our gender and youth cluster to practically implement these instruments across the country,” said the ministry of foreign affairs.

“It is regretful that in this alleged instance, the latter has been jeopardized. We are committed to working closely with the relevant U.S authorities to take the appropriate action, following the outcome of all investigations,” it added.