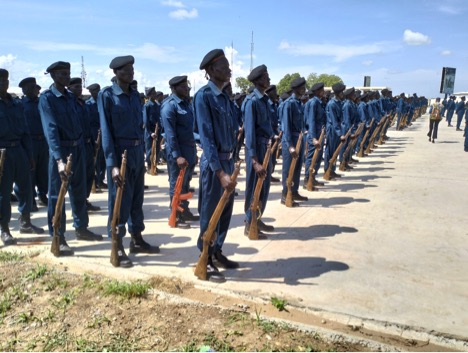 The government of South Sudan is prepared to graduate Over 50,000 out of the total 83,000 unified forces from national security, police and VIP protection unit and others tomorrow having completed their three-year  professional training.

Speaking to reporters during the final preparation of the forces on Monday, the Minister of Defense and veteran Affairs Hon. Angelina Teny said that they are fixing a few things to enable smooth graduation process scheduled to happen on Tuesday.

“We are here watching the final preparation by our forces which are to be graduated tomorrow, the forces are from the army, police, wildlife, correctional services, National security and Civil defense forces who have been coached on security issues for the last three years. We really appreciate them and their trainers for their patience,” she expressed.

The minister also revealed that, they are going to be busy with deployment of the new members of the unified forces to different places of assignment while flagging off training of next bunch whom she said will only train for six months due to the lesions they learnt from the previous episode.

In a similar development, Minister of Interior, Mahmoud Solomon confirmed to the scribes that the forces are ready for graduation.

“We are not 100 percent but at least 80 percent and with this, we shall deploy forces in all departments such as; security forces, police, prison, national security and these service men and women will propel us towards the direction of lasting peace across the country,” he said.

On the other hand,Mr.Tut Gatluak Manime the presidential advisor on national security affairs said that, they  are very happy because President Salva Kiir and first vice president, Riek Machar, Hussein Abdelbagi, and other Vice Presidents are likely to share forum during this event as it is going to be historical in the implementation of security arrangements.

“We are now supervising and witnessing military march as the forces rehearse ahead of graduation, we will have to implement all pending tasks and phase two will begin soon, they will not take long in the training centers s we shall do the next one for only four months,” he said.

The presidential advisor who thanked the army for making a step towards progress underlined hope that the unified forces will protect the country and the constitution of South Sudan to promote rule of law and sanity in its administration.

The graduation of forces, which is a pillar within security arrangement, has been deferred more than once in the last three years due to multiple factors including logistical issues and what observers’ termed as a lack of political will.