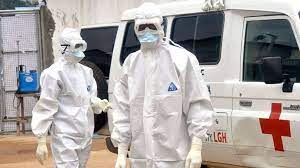 This was revealed by Martin Elia Lomoro, the Minister of Cabinet Affairs after the weekly cabinet meeting in Juba.
“The Council of Ministers considered the presentation on the importance of controlling Ebola Viral
Disease at the entrance points that are close to Uganda and Democratic Republic of Congo,” Lomoro told journalists.
He said that the request to shore up preparedness efforts at the borders with the two neighboring countries was arrived at after the Acting Minister of Health, and Minister of Higher Education Gabriel Changson Chang informed cabinet.
“We questioned whether the ministry is capable to do that or not, and they told us that the ministry is capable to control the Ebola since they have experts and equipment,” Lomoro said.
The government on Tuesday announce it was stepping up vigilance on Ebola Viral Disease along it’s borders after Uganda..
Uganda’s ministry of health has so far confirmed 11 deaths from Ebola-Sudan strain since confirming the
first case this week in the central Mubende district.
On August 21 st , the DRC government announced an Ebola outbreak after detecting a 46-year-old woman
living in the city of Beni, in the province of North Kivu.
Victoria Anib Majur, the Undersecretary in the Ministry of Health, advised communities living along the
border with Uganda and the Democratic Republic of the Congo (DRC) to report any suspicious case of
Ebola to health authorities.
BACKGROUND OF EBOLA SUDAN STRAIN
The Ebola Sudan was named because the virus causing it was first discovered in the southern part of
Sudan, present-day South Sudan, in 1976.
The World Health Organisation (WHO) initially categorised Ebola, whose name derives from River Ebola
in former Zaire, now the DR Congo, as a hemorrhagic fever before revising it to Ebola Virus Disease
(EVD).

According to the global health watchdog, Ebola Sudan is a single member of the Sudan ebolavirus
species and one of the six known viruses within the genus Ebolavirus, and one of the four that causes
EVD in humans and other primates.
The first known EVD of the Sudan variant was registered on June 27, 1976, and 151 of 284 infected
persons died.
The disease cannot be differentiated from others caused by other ebolaviruses by just clinical
observation alone.
In a statement, WHO’s Africa office said it was helping Uganda’s health authorities with the investigation
and staff deployment to the affected area.
The WHO said there had been seven previous outbreaks of Ebola Sudan strain, four in Uganda and three
in Sudan.
It said Uganda last reported an outbreak of the Ebola Sudan strain in 2012 and an outbreak of the Ebola
Zaire strain in 2019.
Currently, unlike Ebola Zaire, there is no vaccine against the Sudan strain.
The global health watchdog statistics show that four in every 10 persons infected by the Ebola Sudan
strain die, but early initiation of supportive treatment is known to reduce the fatality rate.