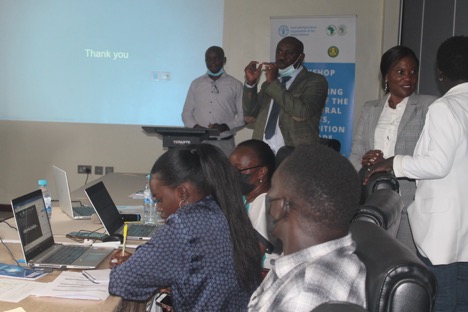 At least 20,000 local farmers are set to benefit from the new Agricultural Markets, Value Addition and Trade Development (AMVAT) Project launched on Thursday by the UN Food Agricultural Organization (UNFAO).

The project funded by the African Development Bank (AfDB) to a tune of 14 million U.S dollars will provide farmers and traders, particularly women and youth with new skills and knowledge and post-harvest and agro-processing equipment they need to produce competitive products.

Dr. Loro George Leju, Director General for Agricultural Production and Extension Services in the Ministry of Agriculture and Food Security said AMVAT will support farmers in the counties of Bor, Juba, Terekeka, Magwi and Torit to increase production.

“They are recording the farmers, they are following up their activities and giving them support in terms of tools and equipment. Crop production is very important and you cannot produce crops when you don’t have markets,” Leju told The Juba Echo in Juba.

He added that the project also aims at developing commercial agriculture in the country, adding that it will help reduce on the volume of food imported from region.

“We are emphasizing the staple crops that we are growing here such as maize, sorghum, groundnuts and sesame these are the crops we grow in this country, we want to encourage the farmers to produce at commercial basis so that we reduce on food imports,” said Leju.

The second component, he said looks at improving post-harvest practices, improving aggregation and increasing the value addition of what has been produced.

Sebaduka added that the produce will be channeled through 20 aggregation business centers that link up with cooperative unions.

The purpose of the aggregation business centers is to work as service centers for production, value addition, and market linkage and market information.

The five-year project that is going to be implemented in Eastern Equatoria, Central Equatoria and Jonglei will end in December 2025.

Francois Nzabahimana, Head of Mission CARITAS Luxembourg a partner of FAO based in Magwi and Ikotos counties said they are already helping farmers to grow seeds for farming.

“We have been engaged with FAO as partners in seed multiplication program, the idea came up to encourage farmers to produce their own seeds, at the moment we have 400 seed growers in Magwi County supported by FAO,” said Nzabahimana.

“With this upcoming project (AMVAT) we will be looking at actually transforming that aspect into markets so that farmers don’t see subsistence farming only for eating, but instead sell their products in the market in order to generate income,” said Alier, whose organization specializes in crop and animal production in both Terekeka and Juba counties.