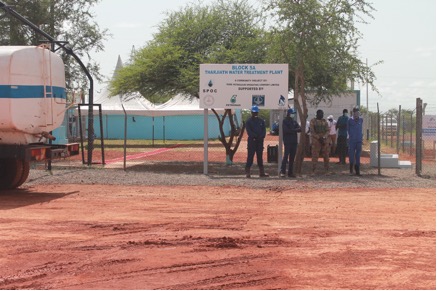 South Sudan has issued a demand to companies exploiting crude oil, to provide piped drinking water to communities and build permanent structures in the base-camps for workers.

The Minister of Petroleum Puot Kang Chol said during the resumption of production in Block 5A on Monday that the government would no longer tolerate prefabricated buildings called “prefabs” in the oil fields.

According to him, the decision was reached at a cabinet meeting in Juba.

“These prefabs you see around was build during the time of Sudan because they knew they would go away and the aim was to quickly exploit the oil,” Chol said.

“Now since you are here to stay and will not go away, we will demand that you build permanent structures which will stay for long.”

Chol also demanded that instead of hiring water trucks to provide water to communities, the oil companies must use the money to install a network of water pipes across the oil producing region.

“These trucks you contract to supply water, they cost a lot of money in the long run which can be used to install the water pipes to provide the communities more efficiently,” he said.

“If you want to maintain the trucks, you can use them for other work but begin planning for piped water.”

The consortium operating Block 5A, Sudd Petroleum Operating Company on Monday also inaugurated a water treatment plant that will serve about 20,000 people in Koch County in Unity State with clean water.

“For me, that is not the solution,” Manytuil said.

“We need a durable solution to this water.”