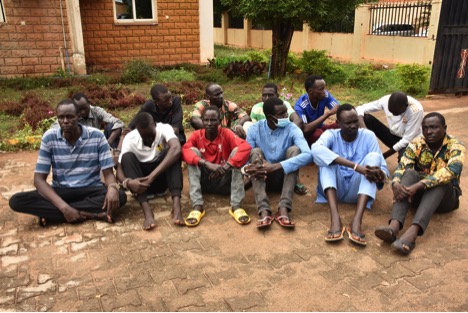 South Sudan’s government has arrested 12 people in connection to robberies, abductions and murders of people along the highways in the country.

The group was paraded before reporters at the National Security Services detention center in Juba on May 19.

Describing them as “notorious criminal elements” the National Security Spokesman, David John, said the suspects will be treated as a national security threat.

“They are going to be investigated,” John said.

“The men were apprehended for frequent highway armed robberies and ransom related crimes,” he added.

“So far the security organs have taken these acts as serious threats to our national security that requires prompt and decisive action in the context of their mandates and the arrest and detention of this group amounted to reduction of highway related crimes and security threat by about 90 percent,” John said.

The areas where those arrested are suspected of having committed the crime are Juba – Yei, Juba-Terekeka and Juba-Nimule highways, according to John

“During their illicit operations, the group indulged in hijacking of vehicles at gunpoint, abduction of both South Sudanese and foreign nationals, primarily with the intention of extorting money in form of ransom, torturing, maiming and in some case executing those taken hostage whenever relatives of the captives or hostages failed to pay ransom,” John explained

He noted that recent incidences have been abduction for ransom of three South Sudanese and an Ethiopian on Juba-Terekeka highway, he further said nine others including seven South Sudanese and two Ugandans were abducted on the same road.

John said the suspects abducted a person of Somali origin and demanded a $60,000 ransom.

John urged the public to always cooperate with security organs by providing information that can lead to detection and prevention of crimes.