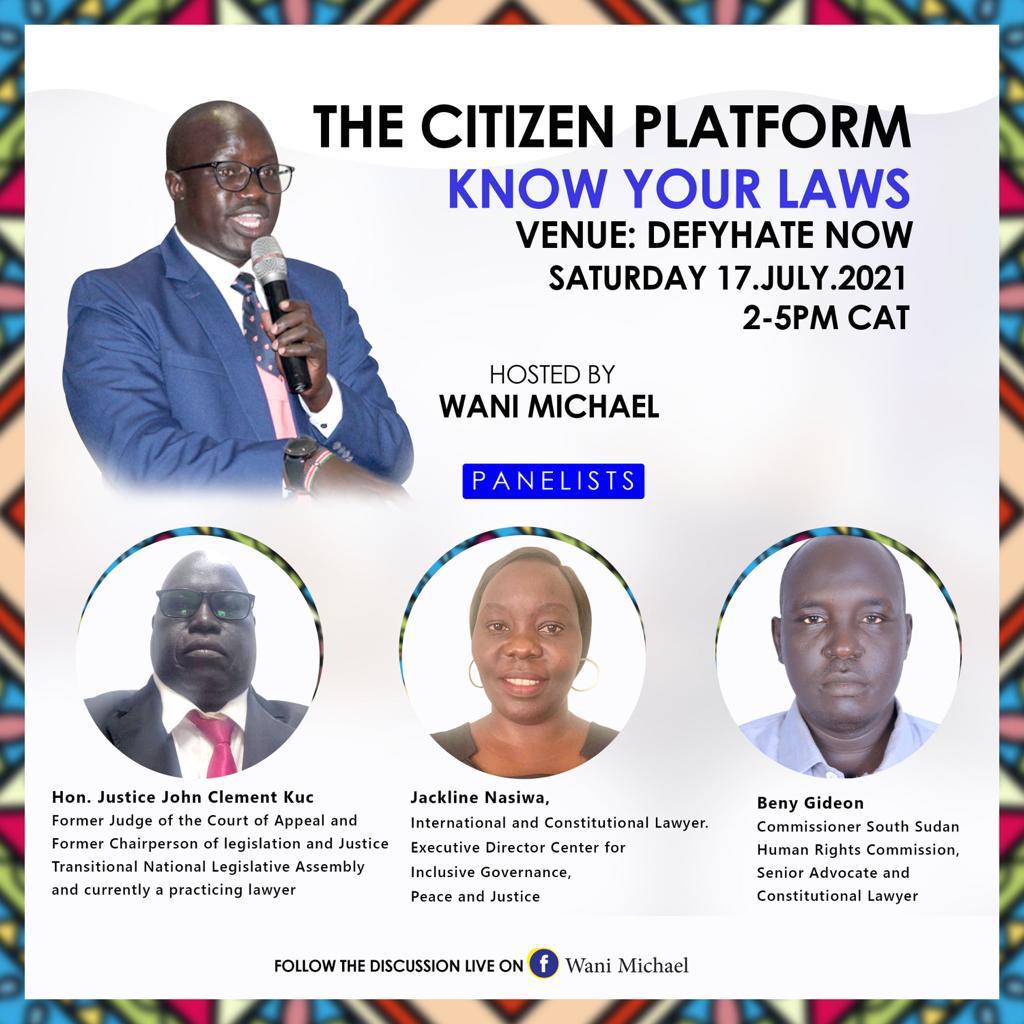 Juba-based rights activists have condemned the country’s National Security Service for cancellation of civic education awareness on the constitution postponed on Saturday.

Civil Society Forum activists said they had scheduled a panel Discussion on Constitutional History of South Sudan for July 17, 2021 in Juba in a bid to educate citizens on their rights and duties enshrined in the constitution of South Sudan before the National security inferred.

“The event was part of a series of panel discussions aimed at creating an environment for youth to discuss, understand and own the constitution and its review process as provided for in the 2018 Peace Agreement,” the Statement obtained by the Juba Echo partly reads.

According to the witnesses, the National Security officers stormed #DefyHateNow, the venue of the event on Saturday before its commencement, ordering its immediate cancellation.

They later proceeded to confiscate the event’s banner but returned it after a moment.

Boboya James, a Juba-based activist, said it was a legitimate right of the civil society organizations to discuss matters that affect society as the government does.

According to Boboya, the reason for the event’s cancellation was “illegal” and “unconstitutional”.

“The civil society thought it was important to discuss the document which guides the country,”

But the national security officers were heard saying there were no other institutions meant to discuss issues of the constitution of the country accept the parliament which is mandated to discuss them.

He said the legitimate event was blocked, stating that they have condemned it in the strongest terms.

He said if the government is committed to building peace, it should all civil societies to play their roles of uniting people and discuss matters that affect them.

David John Komuri, Director Public Relation Internal Security Bureau said his office has not received a case from civil society that NSS canceled an event and its whereabouts over the weekend.

“Where was this? I am not aware. They [civil society] would have communicated to us,” Komuri told Juba Echo on Monday

The event circulated on social media, themed; “The Citizen Platform; Know Your Laws”, was to be hosted by Wani Michael, the Executive Director for Okay Africa Foundation, a youth led organization.

The panelists were supposed to be Hon. Justice John Clement Kuc – Former Judge of the Court of Appeal and Former Chairperson of legislation and Justice Transitional Legislative Assembly, currently a practicing lawyer; Jackline Nasiwa – International and Constitutional Lawyer who also doubles as the Executive Director of Center for Inclusive Governance, Peace and Justice; and Beny Gideon – the Commissioner at South Sudan Human Rights Commission, who is also a Senior Advocate and Constitutional Lawyer.

The forum said it considers the cancellation of this event a ‘gross violation’ of the constitutional rights of citizens to freedom of expression, association and assembly and a deliberate move to undermine citizens’ participation in the implementation of the Peace accord.

According to South Sudan Constitution 2011 as Amended 2013, Article 4, section 4 says that “All levels of government shall promote public awareness of this Constitution by translating it into national languages and disseminating it as widely as possible.

The articles provide for the teaching of the Constitution in all public and private educational/training institutions as well as in the armed and other regular forces, by regularly transmitting and publishing programmes in respect to the media and press.

The civil society encourages the National Security Service to support citizens to engage in peaceful and constructive activities to prevent citizens’ energy being negatively used in perpetuating violence, destruction, and social fragmentation, in a search for lasting peace.

It further urges the Security Service to uphold its founding Principles as stipulated in Article 6 of the National Security Service Act, 2014, which emphasizes the need to be subject to the authority of the Constitution and the law; respect the will of the people, the rule of law, democracy, human rights and fundamental freedoms; while exercising professionalism in its mandate which focuses on information gathering, analysis and advice to relevant authorities.

The SSCSF, established in December 2017 to provide unified contributions from civil society to the High-Level Revitalization Forum (HLRF). It now acts as a bridge between the peace process and the South Sudanese population as provided for in Chapters II 2.4.8.4/5/6/8 and VII 7.2.2 of September 2018, respectively.