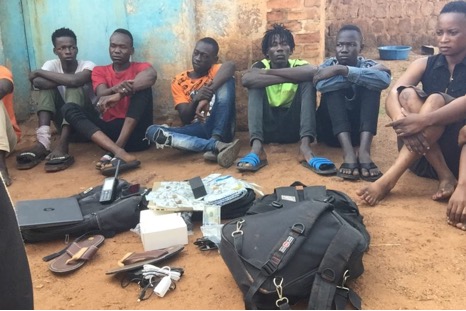 The Western Bahr El Ghazal State’s police have over the weekend arrested seven suspects believed to have been behind stealing at Catholic Bishop’s Residence in South Sudan’s Wau town.

Earlier May, suspected thieves broke into the Most Reverend’s residence, when he was away, and stole electronic items and cash amount equivalent to over 20,000 US dollars.

The group also made away over 70,000 South Sudanese pounds, academic documents, computers, and a satellite Thuraya phone recently during a second incident.

Maj. Gen. Samuel Ajuong Chwar, the State’s police commissioner told Juba Echo from Wau that at least five suspects have been arrested in connection to the two incidents.

They comprise of three young men and two ladies.

“We arrested some here in Wau but on Saturday, we brought the last suspects from Juba,” he told Juba Echo.

According to the police official, some of the suspects were intercepted in Juba and transferred back to Wau on Saturday in order to be tried.

Gen. Chwar said the suspects will be arraigned before court of law as soon as possible.

“For justice to be served, we will take them to court. If they are free of the crime, they will be released and if they are found guilty, they will face imprisonment,” he said.

The police revealed they have recovered 2,000 dollars, two laptop computers, an iPhone, and a Thuraya satellite phone from the suspects.

The state minister of Cabinet Affairs, Arkanjelo Anyar Anyar Mel applauded the police for their efforts.

“We appreciate the efforts of the police that went up to Juba to bring the culprits,” said Anyar.

“I’m urging the police and the prosecutor to continue with the investigation and tell us what really happened,” he added.

Father Dominic Luka from Wau Catholic Diocese said they were hoping for justice to be served.

“For sure when the incident happened, it was a surprise. How could thieves steal from the house of the Bishop but we in the Church, are in the hands of the government that is why we reported the case to the government. The government should continue with its work because nobody is above the law,” ‘he concluded.

Rev. Bishop Matthew Remijo, 49, has been at the helm of Wau Diocese since January following his appointment in November last year.

He was recently appointed by Pope Francis as the Apostolic Administrator of Rumbek Diocese, six days before the burglar happened.

He temporarily governs Rumbek Diocese while the Bishop-elect of the Diocese, Father Christian Carlassare recovers from gunshot injuries after he was shot at both legs by unknown gunmen at his residence in April.