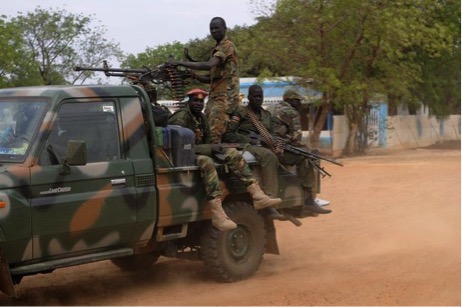 The South Sudan People’s Defense Forces have been deployed in the Nimule border town to mitigate rising tension among communities in the aftermath of recent civilian killings.

This was confirmed Wednesday by Maj.Gen Lul Ruai Koang, the SSPDF spokesman.

“The tension was rising and reaching uncontrollable point, we have deployed security forces in Nimule. The suspected killer of the chief is arrested and he is going to be arraigned in court,” he told Juba Echo in an interview.

This came in the aftermath of the shooting to death of on 11th July, chief John Ebele of Anzara Boma.

Ebele instantly died and six other people including the police chief of Nimule were left nursing bullet wounds.

The deceased chief and other people were attending funeral of two young men believed to have been killed by suspected armed cattle keepers.

Michael Makuei Lueth, the national minister for information, said the government is seriously aware of the rising inter-communal violence in parts of the country.

Adding that they have already taken action to quell the disturbing situation in Nimule.

“We have already taken action; the president has already directed the movement of forces to the areas concerned. The governor who is the man responsible in the state is responding and security forces have been sent there to arrest the situation,” Lueth said.

Local youth in Nimule held demonstration following the killing of their chief, thus disrupting traffic along the road linking neighboring Uganda to Juba.