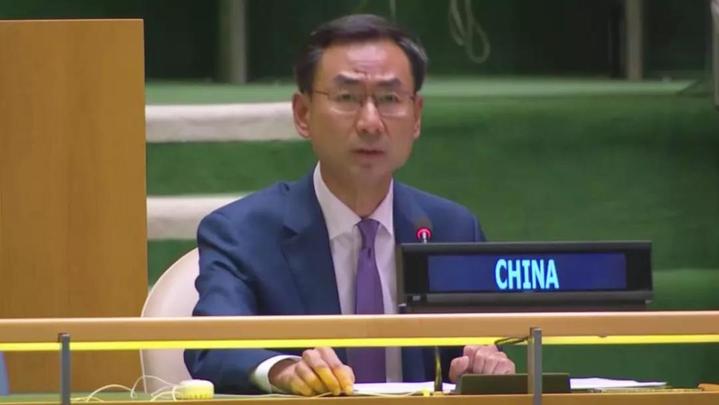 It has been nearly eight months since the crisis in Ukraine broke out. As we speak, the conflict is still raging on, the flames of fighting still spreading, and the prospect for a peaceful settlement not yet in sight. The crisis is getting increasingly protracted, expanded, and complicated, and its spillover effects further penetrating to and affecting economy and people’s livelihood. It has brought about more instability and uncertainty to an already turbulent world and caused deep concerns.

During the recently concluded general debate of the UN General Assembly, state leaders from around the world expressed their views and propositions on the crisis in Ukraine. Despite differences in views, overall, most countries called on the parties to the conflict to cease fighting as soon as possible and resolve the crisis peacefully through dialogue. They all called for greater humanitarian relief for the people of Ukraine, who are deeply affected by the crisis. They called for joint international efforts to mitigate the spillover impact, especially that on developing countries. And they all called for unity to avoid bloc confrontation triggered by the crisis and the start of a new Cold War. These appeals and demands should be the focus of our attention and the goal to be achieved at this emergency special session. In this regard. China wishes to emphasize the following.

First, sticking to dialogue and engagement for a political settlement to the crisis in Ukraine. China is deeply worried about the recent intensification of ground conflicts, and saddened by the civilian casualties and damages to civilian facilities thus caused. What is urgent now is to guide the parties concerned to exercise restraint, avoid escalation of conflicts, prevent the confrontation from getting out of control, and deescalate the situation. In the final analysis, the Ukraine crisis has to be resolved peacefully. However daunting the difficulties and challenges are, the door to political settlement shall not be closed, diplomatic negotiations shall not be stalled, and efforts to stop hostilities and promote peace talks shall not be slackened. The international community must encourage the parties concerned to relaunch peace talks as soon as possible, incorporate reasonable concerns into negotiations, put feasible options on the table, and create conditions and space for the cessation of hostilities and settlement of the crisis.

Second, increasing humanitarian relief and alleviating the plight of the civilians affected. Since the outbreak of the crisis, the humanitarian situation in Ukraine has been deteriorating, and the coming long winter will further aggravate the difficulties. China commends Ukraine’s neighboring countries for hosting millions of refugees, and supports the UN and international humanitarian agencies in assisting Ukraine and helping share the burden of its neighbors based on the principles of humanity, neutrality, impartiality, and independence. Parties to the conflict should strictly observe international humanitarian law, refrain from harming innocent civilians, give priority to protecting women, children and other vulnerable groups, facilitate evacuation and cooperate with humanitarian aid. China calls on the international community to increase humanitarian assistance to Ukraine and its neighboring countries, to ensure proper resettlement of the people affected by the conflict. The safety and security of nuclear facilities cannot be compromised, not even by the smallest margin. We call on all parties concerned to exercise restraint and prevent any occurrence of irreparable humanitarian disaster.

Third, strengthening solidarity and cooperation to minimize the spillover effects of the conflict. The interwoven impact of the COVID-19 pandemic and the crisis in Ukraine has exposed all countries in the world, developing countries in particular, to a myriad of challenges, including food security, energy security, and financial security, making it all the more difficult to realize the 2030 Agenda for Sustainable Development. All-out and indiscriminate sanctions will not help solve the problem. Instead, they will only disrupt the stability of global supply and industrial chains, amplify the spillover effects of the crisis, and affect the normal life of the people around the world. The conclusion and implementation of the Black Sea grain shipment agreement has played a positive role in stabilizing global food prices and improving food supply in developing countries. We encourage more such efforts, and look forward to more similar arrangements. We call on the international community, the UN in particular, to keep development high on the international agenda, diffuse the spillover effects of the crisis in Ukraine, help developing countries overcome difficulties, and prevent the hard-won development gains from going down the drain.

Fourth, abandoning the Cold War mentality and preventing the world from falling into division. The crisis in Ukraine shows once again that clinging to the Cold War mentality and bloc politics, creating bloc confrontation, and pursuing absolute security will not bring peace, but will only lead to conflicts, which serves no one’s interests. At a time when the world needs unity and cooperation to overcome difficulties, it is irresponsible and dangerous to focus on ideological differences, intimidate and force other countries to take sides, create isolation and exert pressure, and engage in decoupling and chain-cutting. We must draw lessons from history, reject division and confrontation, uphold solidarity and cooperation, practice multilateralism, and jointly safeguard the international system with the UN at its core and the international order based on international law, with a view to promoting world peace and development.

The General Assembly, as the most representative organ of the United Nations, should play an active and constructive role on the issue of Ukraine by bridging differences and forming consensus, garnering the greatest synergy for peace talks and finding the greatest common factor among Member States. We have always believed that any action taken by the General Assembly should be conducive to the deescalation of the situation, be conducive to the early resumption of dialogue, and be conducive to the promotion of a political solution to this crisis. The draft resolution submitted to this emergency special session for voting will not help achieve the above-mentioned objectives. Therefore, the Chinese delegation will abstain. Moreover, the Chinese delegation wishes to point out that the work of the GA should be conducted in full accordance with the rules of procedure, and should reflect fairness and impartiality. With regard to procedural issues, the views of Member States should all be fully expressed, and their motions should all be given equal weight.

On the question of Ukraine, China always maintains that the sovereignty and territorial integrity of all countries should be respected, the purposes and principles of the UN Charter should be observed, the legitimate security concerns of all countries should be taken seriously, and support should be given to all the efforts aimed at peaceful solutions. As a responsible country, China will always stand on the side of peace. We will work with the international community, and play a constructive role in deescalating the situation and seeking a political solution to the crisis.