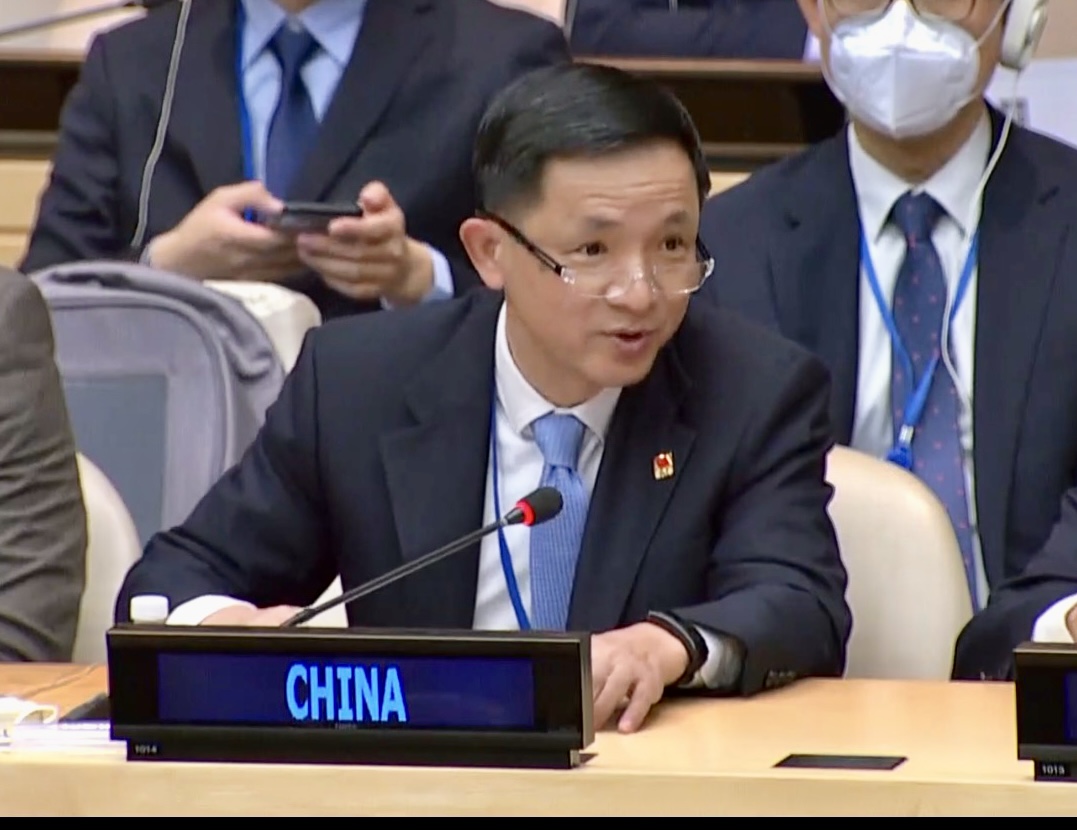 China congratulated Gabon on the success of the African climate week last month. As one of the a few countries in the world where carbon sequestration exceeds carbon emission, Gabon has made positive progress in protecting the natural environment and addressing climate change, providing experience and practices for parties to draw upon. I welcome Foreign Minister Moussa-Adamo presiding over today’s meeting. And I thank Assistant Secretary-General Pobee, Mr. Gahouma, and Director Youssef for their briefings.

As one of the regions most affected by climate change, Africa is also where the weakest capacity to address the impact of climate change is found. Africa’s share of global GHG emissions is less than 4%, and yet the temperature rise on the continent is faster than the global average. The frequent occurrence of extreme weather events and meteorological hazards have seriously affected Africa’s ecological environment, and hampered the socioeconomic development, sparking the thought-provoking question: what is the relationship between climate change and security?

Climate change may increase resource scarcity and exacerbate tensions, but it does not necessarily lead to armed conflict. This summer, both Europe and parts of Africa experienced spells of extreme heat. But the aftermaths were very much different, primarily due to the huge difference in the two regions’ ability to cope with climate change. This tells us that the ability to withstand climate shocks is crucial. To stop climate change from becoming a security threat, we must take targeted and calibrated response, focusing on helping Africa strengthen capacity-building, bolster climate resilience, and accelerate the implementation of the 2030 Agenda. In this connection, I would like to make the following four points.

First, pragmatic actions should be taken to help Africa improve its response capacity. According to WMO’s statistics, only 40% of the African population have timely access to disaster early warning information. The international community should take concrete action by working on specific issues such as monitoring and early warning, disaster preparedness, as well as prevention and mitigation, to increase support and investment in Africa in order to help enhance its response capacity. China supports Secretary-General Guterres’ Early Warnings for All Initiative, and supports the UN in strengthening coordination with the AU and sub-regional organizations on climate actions to make greater progress in building greater climate resilience on the continent.

Second, developed countries should honor their climate financing commitments to Africa as soon as possible. Helping Africa cope with climate change is not about how loudly one chants slogans, but rather it is about the commitments being fulfilled. It is about whether Africa’s needs are being met. Developed countries have pledged to provide 100 billion annual climate financing to developing countries. European countries have also pledged to double financing support to climate projects in poverty-stricken African countries by 2025. These pledges cannot and must not be just lip service. Historical arrears must be made up as soon as possible. A new collective quantitative goal should be defined, so that African countries can receive actual funds needed to carry out work that produces tangible results. The international financial institutions and  climate finance platforms should also lower financing threshold to ensure that the climate finance is accessible to Africa in a fair way.

Third, on climate issues, there is a need for international equity and justice. Many countries in Africa are still at the early stage of industrialization. They face the dual task of socioeconomic development and climate change response. Developed countries, on the other hand, have already achieved industrialization. Asking Africa and other developing countries to assume the same climate responsibilities as developed countries goes against international equity and justice. To meet the temperature control target set by the Paris Agreement, developed countries should take the lead in drastically reducing emissions and significantly moving up the date to achieve carbon neutrality, so as to provide development space for Africa and other developing countries. Lately, when it comes to climate change issues, the vacillation and retrogression on the part of some developed countries is a cause for concern.

Fourth, Africa should be supported in their green and sustainable development efforts. There is the recognition among African countries that the climate change response is only possible through sustainable development, and they have taken active steps in this regard. The AU and African countries have formulated clear goals for energy transition, striving to build a low carbon, affordable, and clean energy system. The international community should increase its support to Africa in a comprehensive way, inter alia, in relation to financial, technological, and human resources, to help Africa unleash its green development potential, and achieve its green and low carbon transformation.

Next month, the UNFCCC COP27 will be held in Sharm el-Sheikh, Egypt. This is a premier international climate forum in an African country, as well as an important opportunity for the international community to reaffirm its climate commitments to Africa. China gives its full support for Egypt and Africa in hosting this conference, and looks forward to a positive and balanced outcome of the conference on mitigation, adaptation and finance.

In the end of last year, the eighth ministerial conference of the Forum on China–Africa Cooperation adopted the declaration on cooperation on combating climate change, proposing the establishment of a China-Africa strategic partnership in a new era to address the impact of climate change. The conference also saw the inclusion of the green development project in the initial three-year plan in the China-Africa cooperation vision 2035. Last month, China organized the ministerial meeting of the Group of Friends of the Global Development Initiative, where a proposal was made to promote the global clean energy cooperation partnership. Among the first projects is the cooperation on climate change response and green development in 19 African countries. China’s support to Africa in combating and tackling climate change has been consistent and ever-present.