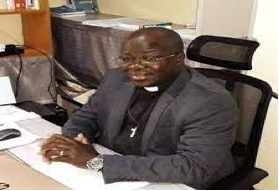 Recovered Bishop’s Properties Handed Over To The Church In Wau

Police in Wau Town of Western Bahr El Ghazal State have handed over the recovered properties of the Catholic Diocese Bishop after the arrest of the suspects.

On Saturday, the police arrested seven suspects believed to have been behind stealing at Catholic Bishop’s Residence in Wau.

“We recovered 70,000 SSP, 20,000 USD and two laptops among other some items. The items were received by clergy in the Catholic Diocese,” said Maj. Gen. Samuel Ajuong Chuar, The Western Bahr El Ghazal State police Commissioner.

On May 9, suspected thieves broke into the Bishop’s residence stealing electronic items, about 70, 000 SSP and over 20,000 US dollars while Bishop Matthew Remijo was away.

The group had made away with over 70,000 South Sudanese pounds, academic documents, computers, and a satellite Thuraya phone during a second incident.

Nevertheless, Gen. Chuar called on the Church administration to be watchful in order just to avoid any future incidence.

The Police official applauded its officers for apprehending the suspected criminals.

“This time round, I want the clergy’s security to be vigilant of any threat. Anything suspicion should be reported immediately to police”, Gen. Chuar added.

The items reportedly belong to Bishop Remijo when the thieves sneaked into his Residence.

“We are really thankful to the government for recovering these things from the hands of the thieves. We now feel secure for that matter”, he stated.

A 49 year-old, Rev. Bishop Remijo has been at the helm of Wau’s Diocese since January following his appointment last November.

He was last month appointed by Pope Francis as the Apostolic Administrator of Rumbek Diocese, six days before the thieves intruded his residence.

He temporarily governs Rumbek Diocese while the Bishop-elect of the Diocese, Fr. Christian Carlassare recovers from gunshot wounds after he was shot at both legs by unknown gunmen at his residence in April.