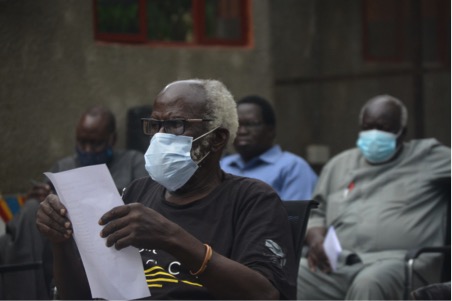 A renowned academia professor Taban Lo Liyong is calling on South Sudan’s ruling party, Sudan People’s Liberation Movement (SPLM) to reconsider a membership in Commonwealth countries so that people can have a proper and quality education system in the country.

Professor Liyong made the remark during the launching of a book titled “English Language for professional” written by Dr. Kenyi A. Spencer.

He urge the South Sudan’s government Secretary General, Abdun Agaw to be at the forefront in fighting poor English in both writing and speaking in government institutions.

“The only way the Secretary General Abdun can help is to return the documents wrongly written and full of grammatical errors to all those undersecretaries in the government institutions. I also urged the government to send their government employees for refresher courses and learn proper language in both writing and speaking,” he added.

“I call upon the UK embassy to embrace the fact that we need privileges from Commonwealth and we want them to the UK to engage South Sudan’s government to join the Commonwealth.” He concluded.