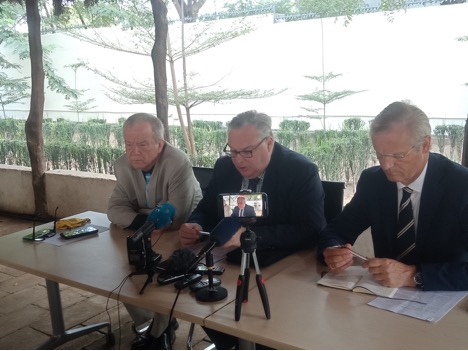 The Troika Countries, the United States, United Kingdom, and Norway are appealing to the South Sudan’s Unity government to demonstrate full commitment towards implementing the peace deal’s tasks than dwelling on arm embargo.

Most of the South Sudan’s officials had previously claimed that arm embargo and sanctions were making the country redundant and that the moves were contributing to slow implementation of the 2018 peace agreement.

But the Troika said fast implementation would be a yardstick to convince the UN Security Council and partners to lift imposed arm embargo on the Country.

“South Sudan is suffering from food deficits and arm surplus, insinuating at so many arms presence in the hands of civilians,” said Larry E. Andre, the US Embassy’s Charge d’affaires in South Sudan.

The Troika diplomats were speaking on Sunday during a Joint Press Conference in Juba on the occasion of the Country’s 10th Anniversary.

The embargo has been on, until it was again extended by the UN Security Council on May 28, 2021 for one more year.

The US diplomat said the peace parties should accept accountability as part of their commitments towards implementing the peace agreement.

He said the Troika countries will not support lifting of arm embargo on South Sudan, as he described the move as “a mere unanimous decision” by UN Security Council that deems government with sole responsibility to meet the required benchmarks.

Bob Fairweather, the UK envoy to Sudan and South Sudan affirmed its support for the young people to encourage nation building.

“Lack of economic measures that create opportunities for youth lead to breakdown of social fabric and with this regards, we want to support the youth to build a peaceful Country”, he said.

Mr. Fairweather said the political manipulation towards youth should be disintegrated and the youth be molded for better future.

Endre Stiansen, the Norway Envoy to South Sudan criticized some organized youth bodies whose behaviors were contrary to the nation building.

The Troika vowed to support the government in humanitarian assistance as well as they supplement youth development program.

Amnesty International had recently warned that lifting the UN arms embargo on South Sudan could have dire consequences for human rights situation in the country.

According to the Human Rights Watch, the Security Council must ensure a range of human rights benchmarks are met before the embargo can be lifted.

These include an end to crimes under international law, reform of the National Security Service (NSS), and the establishment of a Hybrid Court to ensure accountability, according to Amnesty International.