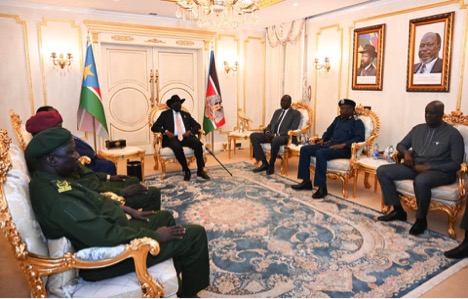 President Salva Kiir Mayardit has directed all the top security
officers to prevail over the rising
violence in Nimule with focus on returning it to Normalcy.
The president announced this directive on Tuesday when he met
with top security officials in his office.
The meeting which was decorated by the Presidential Advisor
on National Security Affairs, Tut Gatluak Manime,the SSPDF

commands and other organized forces held hard talks about the
current security situation in Nimule Town in Eastern Equatoria
State, which resulted in the loss of lives, destruction of property
and displacement of people.
Mr.President in this meeting directed the officers to make sure
that, the perpetrators of this violence are identified for an
appropriate action by the authority.
Relatedly, On Monday, the Governor of Eastern Equatoria State
Louis Lobong Lojore condemned the recent killings of civilians
in Mugali and Nimule towns which led to tension and public
protests calling on the national government to urgently intervene
to save lives in Nimule.
The governor added that, insecurity is disrupting the movement
of people and goods into and out of the country.
He also called for the deportation of Dinka Bor cattle herders
from Nimule whom he blames for the rampant insecurity in the
border town.
It is worth remembering that,on Sunday last week, a group of
armed youth attacked Nimule as a result of killing a Maadi

community chief of Anzara, John Ebele and the shooting of
Nimule police inspector in the leg.