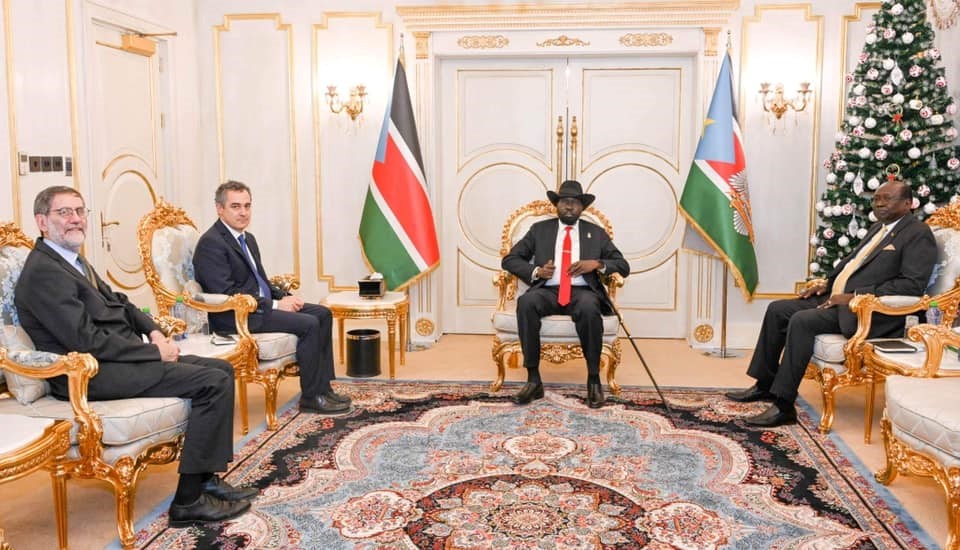 President Salva Kiir held discussion with the visiting high-level delegation of the Sant Egidio catholic community on the resumption of the stalled peace talks with hold-out groups in Rome.

Speaking to the media after the meeting at the President’s office, the Minister of Presidential Affairs, Dr. Barnaba Marial Benjamin said President Kiir and the delegation discussed the importance of political dialogue between the government and the hold -out groups under the South Sudan Opposition Movement Alliance (SSOMA) to end the violence.

Marial further explained the President lauded the community of Sant Edigio for their commitment to support the peace process and bringing together both sides to agree on an inclusive peace process in South Sudan.

In his remarks, the Secretary General of Sant Edigio Community, Paolo Impagliazzo reiterated their commitment to continue mediating between the government and hold-out groups in order to find amicable solution for the sake of South Sudanese people.

This came in the aftermath of the transitional unity government suspending talks In late November with SSOMA while accusing the group of buying time to prepare for war.

In a letter dated 21st of November, addressed to the Secretary General of Sant Egidio in Rome, Italy, the Minister of Presidential Affairs said the decision was not arrived at lightly.

“While we have been preparing to engage in serious dialogue with the non-signatory South Sudan Opposition Group to bring lasting peace to the people of South Sudan, it has come to our attention that this group is using these talks to buy time as they prepare for war,” said Marial.

“Since this development that used the Rome initiative as a cover in preparation for war is diametrically opposed to our view, the government took the decision to prevent the mockery of the noble process,” he added.

The peace talks with the hold-out groups commenced in January 2020.