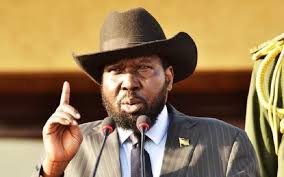 Kiir in a decree aired on state television on Thursday appointed the Ministers of Cabinet Affairs, Health, Interior, Finance and Planning, Transport; Wildlife Conversation and Tourism and the Minister of General Education and Instruction to the task force.

The national task force on Ebola shall ensure that South Sudan is prepared to respond to any suspected case of Ebola and contain the spread of the latter from neighboring Uganda.

In late September, Ugandan authorities announced the outbreak of Ebola-Sudan strain in the central district of Mubende.

The national task force is also mandated to conduct regular testing of any suspected case of Ebola, and determine the magnitude of its infection and shall advise the country accordingly.

It will carry out an assessment and establish isolation centers along the border areas and within the country, and ensure that they are fully equipped with medical personnel and medicines.

The taskforce shall ensure that any suspect or confirmed Ebola case must be immediately placed in isolation, and keenly monitored to avoid rampant spread of the disease.

President Kiir directed Dier Tong Ngor, the Minister of Finance and Planning to avail the approved funding of nearly 30.7 million U.S dollars to the taskforce.