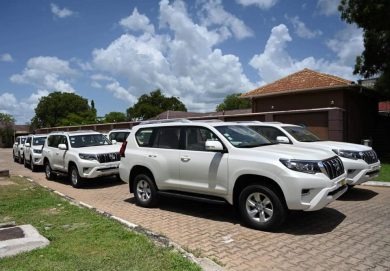 President Salva Kiir Mayardit has donated new vehicles to the Judiciary to enhance the mobility of the Judges and other judicial officers to administer their work effectively.

Chan Reech Madut, the Chief Justice on receiving the vehicles on Saturday from the Executive Director in the Office of the President, James Deng Wal at the State House, said the vehicles came at the right time when the issue of mobility remained a challenge in the Judiciary.

Wal, the Executive Director in the Office of the President during the hand-over ceremony held at State House (JI) said the vehicles will ease movement of several judges in the countryside.

The total of the vehicles to be received by the judiciary are 16 in number, but the chief Justice received so far 8 of them as the first consignment.

Since 2016, the judicial officers have been complaining of poor working conditions that have left some of the senior judges relying on commercial motorcycles (Boda-boda) to report to work.

In addition, the judges have on several occasions gone on strike over low salaries and allowances, understaffing amid backlog of cases, and also political interference in their work by the executive.