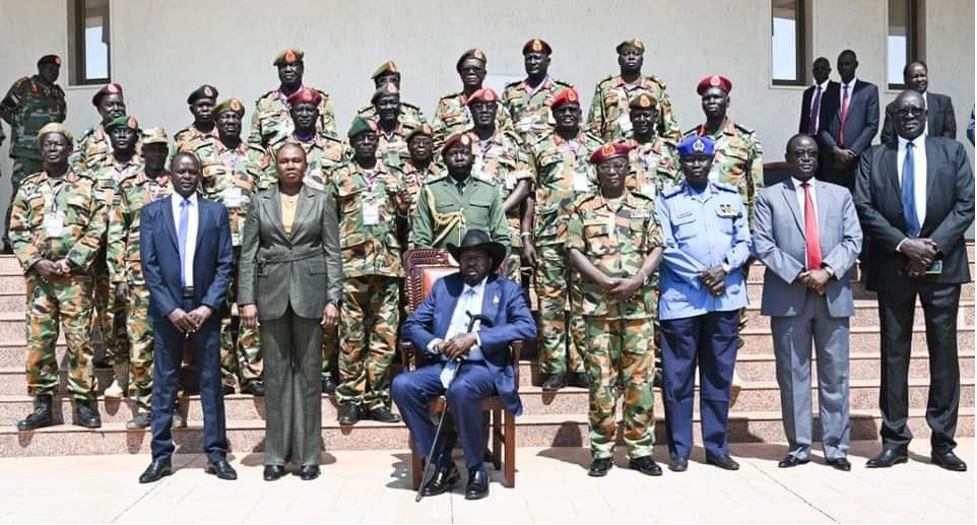 President Salva Kiir Mayardit on Thursday called on armed groups to renounce rebellion and dialogue with his government to resolve their grievances.

Kiir revealed these remarks during the conclusion of the weeklong 8th Command Council meeting of the South Sudan People’s Defense Force (SSPDF) in Bilpham military headquarters in Juba, the capital of South Sudan.

“To some of our brothers who are still in the bush, come back home and join the government so that we can bring a sustainable peace in our country. I urge you to put down your guns and resume dialogue on peace,” said Kiir in a statement issued by his office.

The 8th Command Council Conference of the SSPDF was held under the theme “SSPDF building trust, understanding and Implementing the Transitional Security Arrangement”.

The Command Council deliberated on the progress of the implementation of the security arrangement.

The President also urged the organized forces to execute their orders including the encouragement of positive international investment in the country.

“Let us all avoid going back to war, we are citizens of this country, all of us have a right to live, so let us avoid senseless war. You must stop war since war is destructive but peace brings foreign investors to invest in the country,” said Kiir.

He disclosed that fighting one another is meaningless, adding that it disrupts development and progress so far achieved in the country.

Kiir reminded the attendees that the agreement on the extension of the Roadmap for an additional 24 months was reached so that the parties accomplish outstanding tasks in the implementation of the peace agreement.

“We do not want people to descend into war during elections,” he said.

He added that the work that has begun on making connections on major roads such as Juba-Bor, Bor-Ayod, Akobo, and now Terkeka-Rumbek are great signs of the development and accessibility.

“We are about to open Juba-Bor road and we are going to launch the road construction of Bor to Ayod, Akobo respectively. All these areas of South Sudan we need to connect them with good roads,” he revealed.

Kiir promised to review the resolutions and recommendations made by the command council before approval and consideration.