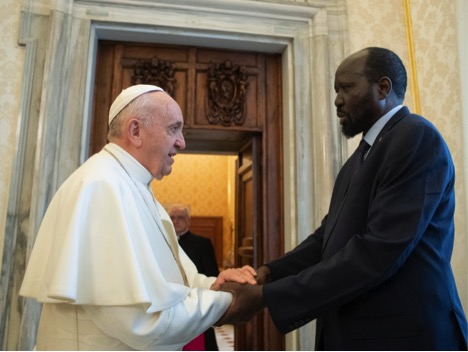 Pope Francis’s visit to South Sudan has been confirmed for February next year by the Vatican.

“He has wanted to visit predominantly Christian South Sudan for years, but each time planning for a trip began it had to be postponed because of the instability and his health,” said the statement issued by the Vatican on Thursday.

In July, the papal visit was called off due to a persistent knee ailment which confined Pope Francis to a wheelchair.

Despite cancelling the journey to Africa in the summer, the pope forged ahead with other overseas visits, including a trip to Canada in late July.  Last month, he spent four days in Bahrain.

The Vatican said Francis would visit DRC from January 31 to February 3 and then spend two days in South Sudan alongside the Archbishop of Canterbury and the moderator of the general assembly of the Church of Scotland.

After DRC, the pope will fly to Juba, the capital of South Sudan.

It said Francis will be accompanied by representatives from charitable organizations in the Democratic Republic of Congo and in South Sudan, a meeting with internally displaced persons, and an Ecumenical Prayer service.

“While visiting the city of Kinshasa, and together with the Archbishop of Canterbury and the Moderator of the General Assembly of the Church of Scotland, the Ecumenical Pilgrimage of Peace to Juba, South Sudan from 3 to 5 February next,” it said.