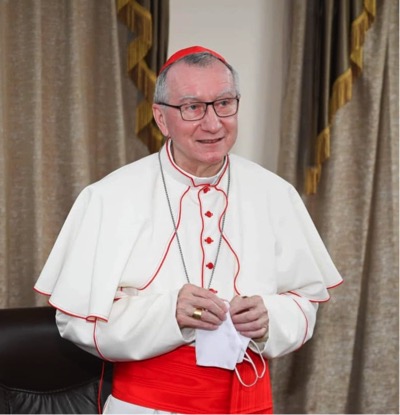 The visiting Vatican Secretary of State Cardinal Pietro Parolin on Wednesday arrived in Bentiu town where he prayed for people displaced by recent heavy flooding in Unity State.

Parolin arrived in Juba on Tuesday to prepare for the visit of Pope Francis whose trip was called off in June after he suffered pain in his knees.

In Bentiu while visiting internally displaced people, he called on the Catholic Church to provide assistance to flood victims.

“When the situation was able to return to normality the floods affected this area, and it is our solidarity and will of the Catholic Church to help in any way, if possible,” Parolin said.

“This population which was stoked by the war first and I have seen the sign of the war and the bishop was telling me about many damages the war has provided in this territory,” he added.

Pope Francis was meant to start his itinerary on 5th till July 8 that would have seen visit neighboring Democratic Republic of Congo and then afterwards South Sudan.

Nearly a million people have been affected by heavy flooding since 2021.

Tungwar said heavy rains are expected to intensify in the coming weeks.

“There is water all over and this is rainy season, we are expecting more rains and we don’t know what will be our fate,” he revealed.

Tungwar noted that most of the land in the State is submerged under water, thus making it extremely hard to cultivate.

“Our people used to grow their own food but because of floods they are now food insecure,” he said.

The Pope’s Envoy is expected to hold holy mass at the Dr. John Garang Mausoleum on Thursday and also at St. Paul Seminary on Friday.

He is also expected to visit Catholic University and Usratuna on Friday before he departs.