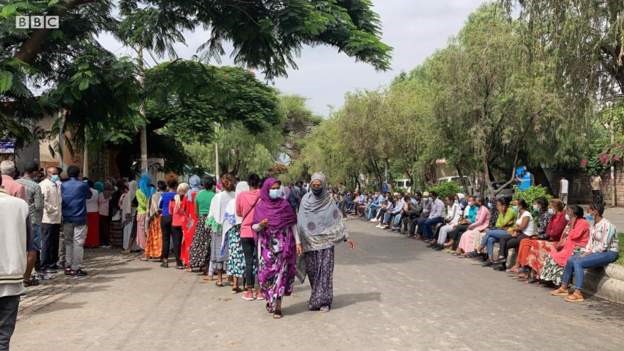 Ambassador Nebil Mahadi, the Federal Democratic Republic of Ethiopian Ambassador to the Republic of South Sudan, described the event of election as a decisive day for Ethiopia and hopeful for a government that strengthens peace, Unity and security of the 110 million Ethiopian people in the 21st century. Ethiopian Authorities and the nation all together have ensured that voters cast their votes freely and peaceful than ever before, added, Ambassador Nebil Mahadi.

Officials in Ethiopia counted ballots on Tuesday after a parliamentary election billed as the first free vote in the country’s history but some an opposition boycott, due to their own silly reasons in some areas.

Prime Minister Abiy Ahmed hopes the national and regional elections showed the success of democratic reforms he launched after being appointed by the ruling coalition in 2018.

The vote reflected a reality in the country of 110 million people. According to the election board, Voters in one of the regions, Sidama, went to the polls a day late on the next day, due to logistical problems. In a tweet, Prime Minister Abiy wrote: “All sections of society have gone out to cast their vote in our nation’s first free and fair election,” he said in a statement: “Democracy is not built in overnight, we are laying it brick by brick.”Almost all polling stations in the capital are trying to finish counting ballots, an electoral board spokesperson told reporters.

Abiy’s newly formed national Prosperity Party is widely forecast to defeat opposition of dozens of mostly ethnically based parties. The ruling coalition and its allies won all 547 national parliamentary seats in the last election under Abiy’s predecessor six years ago, when Ethiopia was one of Africa’s most repressive countries

The vote was seen as a crucial test for the prime minister, whose rise to power in 2018 initially seemed to signal a break with decades of authoritarian rule.

Nearly 40 million of Ethiopia’s 110-plus million people were registered to vote, choosing from 46 parties and more than 9,000 candidates – a record, according to the electoral board. Some opposition parties, boycotted the election due to their own luck of common sense. “Many of Prime Minister Dr. Abiy Ahmed supporters and people in his party believe that with a popular mandate he will have the legitimacy he needs to deal decisively with Ethiopia’s problems. Some polling stations have started posting results. Preliminary results are out, and final ones within two weeks. In most polling stations across the country, Abiy’s Prosperity Party is leading. Aljazeera.  But the opposition is making headways in areas like the capital and towns in other parts of the country and they seem happy with that.

Long queues of voters have been witnessed in polling centres in several cities across Ethiopia including in the capital Addis Ababa. Some of the voters starting queuing as early as 4:am local time. The BBC’s Jibat Tamirat said some of the lines were as long as 200 metres and some voters brought stools to sit on as they waited.

Nearly 40 million eligible and popular voters cast ballots in highest turns. Voting began in the capital Addis Ababa soon after the expected start time of 6am (03:00 GMT) with voters in face masks wrapped in blankets against the pre-dawn chill. Electoral officials in purple vests sprayed voters’ hands with sanitiser before checking their IDs against the register as part of measures against COVID. Polls will close at 6pm (15:00GMT).

Many Ethiopians went to the polls very early in the morning, as early as 4am in many places, to cast their vote. The electoral commission has increased the number of polling stations across the country to avoid large crowds from gathering at polling centres to reduce the risk of spreading COVID but also to hasten the voting process.

The prosperity ticket of Prime Minister Abiy Ahmed and the Senior Parliamentarian Demeke Mekonnen from Amahara Region is among the parties who are running for the Country’s Highest office of Number one and two. Some states reported a vast majority of votes on election day, while others will take several days to count in and provisional ballots.

The perception of one vote will make a difference. After the increasing for many decades, there has been a trend of increasing voter turnout in most established centres. In Ethiopia, millions of voter’s turnout indicates the percentage of eligible voters who already cast their votes. The poor, rich, illiterate, highly qualified professionals, elders, women, youth and farmers altogether vote in a large proportion.

It is the first electoral test for Abiy Ahmed, 44, who rose to power in 2018 championing a democratic revival in Africa’s second-most populous country, and a break from its authoritarian past.

Ethiopian Prime Minister Abiy Ahmed came to power in 2018 on a wave of discontent against what many Ethiopians perceived as a system of ethnic favoritism entrenched by the authoritarian, Tigrayan-led regime that had ruled the country for decades. Abiy’s moves toward opening up political and media freedoms widely lauded, and his peace overtures to Eritrea, which formally ended a long and brutal war, earned him a Nobel Peace Prize. The national elections, which will see 547 federal parliament members elected and the leader of the winning party become prime minister.

Vote count under way in Ethiopia after election

The writer can be reached at abrahamnegah@gmail.com