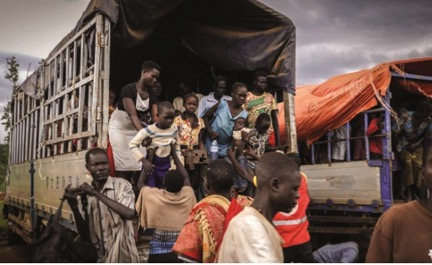 At least about 30,000 South Sudanese refugees have reportedly returned home from neighboring countries since last year amid progress on the 2018 peace deal, according to the UN refugee agency on Thursday.

The return program is spearheaded by the United Nations High Commissioner for Refugees (UNHCR) and South Sudan Relief and Rehabilitation Commission (RRC).

While addressing journalists at the handover ceremony of motorbikes to the government on Thursday, Kimberly Roberson, Acting UNHCR County Director revealed that more than 5,000 refugees returned this year alone.

“This year alone, we have verified the return of 5,000 people who have come from different places but this is not the whole number because we have not reached other places to verify some reports,” Roberson told the reporters in Juba.

The official said the 16 donated motorbikes would boost border monitoring efforts in the country.

According to the UN refugee Chief, the majority of refugee returnees have continued to use border crossing points and most of them returned from Sudan, Uganda, and Kenya.

She affirmed the Agency’s willingness to assisting the returnees with food and other essential basic needs.

“What we are doing now is to know what their needs are and who their family members are and see into it that they get foods and better schools,” Roberson said.

Santino Bol, Deputy Commissioner at South Sudan Relief and Rehabilitation Commission (RRC) said the government and partners were working closely to embark on a community-based integrated approach that helps the returning communities to resume their livelihood.

According to the UNHCR, there are 2.25 million South Sudanese refugees in neighboring countries.