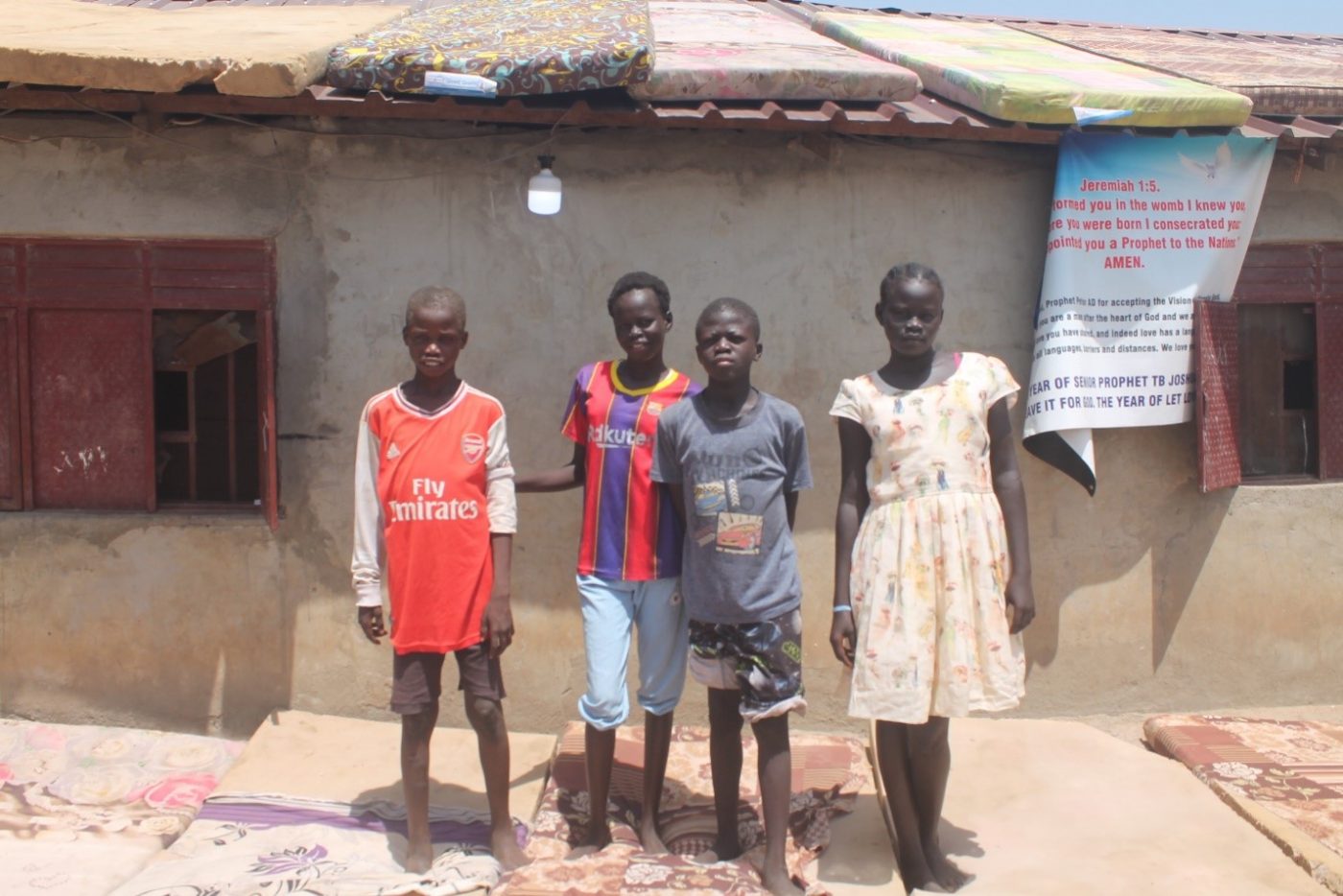 Rebecca Machar Majok, (Far Right) from Rumbek East and three other orphans outside the classroom which they use at night to sleep.
Home
National
Denis Elamu·
National
·8 months ago·6 min read

The legacy of war in South Sudan has particularly reflected in the lives of its most vulnerable victims from children to women and the elderly.

Many of these unaccompanied children and widows are slowly being transformed into good and conscious citizens with the mission of salvaging the battered social fabric of this youngest nation.

Gatjang  Khor Deng, is a 15-year-old boy escaped conflict in Unity State in 2020 and arrived in Juba unaccompanied and with nowhere to go.

He was welcomed with open arms in an orphanage run by Stone International Church located in the suburb of Gudele.

This orphanage under the watch of Prophet Peter Eddy was established in the aftermath of the 2016 renewed violence that dampened the hopes of many South Sudanese.

Deng who lost his mother due to conflict in his native Unity State told The Juba Echo on Saturday that he left home due to the fact his father could not offer him basic needs such as food and education.

He is among the more than 1,300 orphaned children living in the orphanage at Stone International Church whose future could have been lost.

Despite now being far away from the violence he endured in Unity State, he says in a low tone that all is not well as he and others endure lots of challenges at the orphanage.

“We lack good teachers, the teachers here are all volunteers. We sleep in the very classrooms we use for learning during the day,” he says.

Eddy the overseer of the orphanage had initially envisioned supporting about 30 orphans but the number has spontaneously grown huge over the years, due to thousands of mostly unaccompanied children turning up every week at the orphanage.

“We need enough food, I don’t want to go back home because of insecurity in Unity state,” Deng says.

Richard John, 12 from the Parjok area of Magwi County in Eastern Equatoria State has a chilling story to tell as he lost both of his parents during the 2013 conflict that erupted between soldiers loyal to President Salva Kiir and those of his then-Vice President Riek Machar.

He is staying with two of his brothers at the orphanage where he finds solace from his numerous friends from different ethnic groups in this country.

A new nation is being slowly crafted at the orphanage, John says.

He was not yet in school when his parents were alive but now he is studying in primary three at the school run by the management of the orphanage.

His future could have been dampened had not sought refuge in this orphanage.

John says in future when he comes of age he wants to help vulnerable people.

“I find this place very good because all of us from different ethnic communities of South Sudan are well represented here,” he discloses.

Rebecca Machar Majok, 12 from Rumbek East also lost both of her parents.

Her soldier father passed on due to illness while on the war frontline.

Majok and her sister Mary Machar say they were forced to travel from Rumbek after enduring torturous beatings and forced labour under their stepmother.

They are grateful to Prophet Eddy for giving them another chance at a better life.

“I don’t want to get married at a young age before completing my studies. When I grow up I want to be a businesswoman so that I help orphans like me,” Majok says.

“I find this place peaceful and calm compared to the intermittent sub-national conflicts in the countryside, in this place there is no tribalism, nepotism and favouritism all of us are living here together in harmony,” she adds.

Majok says she does not miss home.

Anitah Peter, 12 left Yambio of Western Equatoria State in 2020 following the death of his parents during the renewed violence of 2016.

He says that prior to coming to Juba he never heard of other ethnic groups outside of his Yambio area.

Peter corroborates John when he admits strong attachment to other children from different areas of South Sudan living at the orphanage.

“I see all children at this place as my brothers and sisters,” Peter says.

But all is not rosy at the orphanage.

President Salva Kiir donates a huge piece of land where the church and partly the orphanage site, but Prophet Eddy says they still need more support to take care of many children of fallen soldiers at the orphanage.

A source who spoke on condition of anonymity confided in this newspaper that money amounting to 1.3 million U.S dollars approved by President Kiir’s office to support the orphans were not delivered by those charged to do so.

The source says that only 300,000 dollars out of the total of 1.3 million dollars were delivered to the management of the orphanage.

Nevertheless, hope is not lost

Eddy reveals that he is a man called by God to mentor and nurture the next generation of leaders of this country.

“Children were brought to the house (orphanage) from all the tribes of South Sudan and they were beyond the number of 30 that I had envisioned,” he says.

In 2016, Eddy says the number kept on increasing with the arrival of many children with different kinds of problems.

“Most orphans we received all these years were children of fallen soldiers who passed on during the wars in South Sudan. They were from greater Bhar El Ghazal, Upper Nile and Equatoria regions,” Eddy notes.

He started from humble beginnings

A well-wisher offered Stone International Church two plots where they constructed temporary shelters that are now housing these children at night.

“Now we have a school called TB Joshua International School, so we have the orphanage, school and the home where they sleep for now it is not yet constructed but there are temporary shelters for these orphans,” he discloses.

“Most of the children staying at Stone International Church their fathers are soldiers of the nation that have passed on not because of the war of liberation from Sudan but because of these wars that came up after our independence in 2011,” he adds.

“The situation is deteriorating on daily basis they don’t have a permanent shelter and when it rains the rooms where they sleep are flooded with water. This is the situation forcing us the elders to join together with the prophet because these are our children and we are fathers,” he says.

Maj. Gen Auelet Malekdit, another person knowledgeable of the situation at this orphanage, reveals that the management of the orphanage has a long-term vision of expanding to the 10 states plus three administrative areas.

He calls upon the government and international humanitarian agencies to support Prophet Eddy’s vision.

“We want to involve everyone even the Governor of Central Equatoria State should also know and give them a chunk of land for cultivation to help support the livelihoods of these orphans,” Malekdit says.