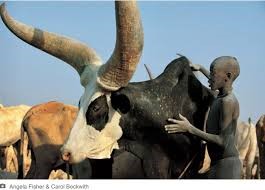 Police in Lakes State confirmed that the notorious bull that was detained for allegedly killing a 12-year-old boy and its owner has been bailed out from custody.

Over the weekend, the bull and its owner Kuei Monytoch  Majak were after the incident.

Elijah Mabor, the State Police Spokesperson said the decision was taken because the deceased family and the bull’s owner are related and have agreed to settle the case at home.

“The bull and the owner of the bull were bailed out, up to now they are still free at home until the funeral is finalized, then they will solve the issue,” he said.

“The bull belongs to the same family and the deceased is also a member of the same family, so such cases are used to be solved in a traditional way,” Mabor added.

He said, “according to our culture here after the funeral is finished, they will try to settle the case at the family level.”

The incident was another reflection of hostile animal-to-man relations in Lakes State after coming just days when a notorious ram attacked a 42-year-old woman, broke her ribs and killed her on spot.