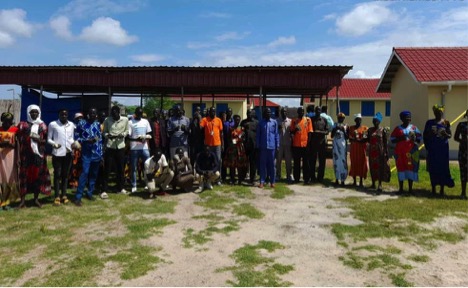 About 60 traders in Leer county have received a financial boost amounting to 600,000 South Sudanese pounds to cover business loses they suffered during the recent conflict in southern unity from Norwegian Refugee council.

The beneficiaries of this cash bonanza who were given 10,000 South Sudanese pounds each included 27 women and 33 male traders.

The Norwegian Refugee Council Team leader Pedro Marial joseph, confirmed to Juba Echo in a telephone interview about the cash distribution in Leer and opined that, their main aim of doing this project is to empower vendors who suffer losses due to the crisis in South Sudan.

“We have distributed 600,000 South Sudanese pounds to 60 traders yesterday, it’s a first-time of such distribution and we will continue to support traders in Leer,” Marial highlighted.

“We will use this money as source of capital to start our businesses, everyone is feeling happy including businesswomen who have received support from Norwegian Refugee council, our business was interrupted by the recent conflict and it the right time to begin with this amount of money.” Gai added.

The conflict in South Sudan interrupted businesses as many people fled for refuge in safer locations particularly in Southern unity state in the areas of Leer, Mayendit and Koch County.

Rebecca Nyarok Phar a 39 year old businesswoman in Leer town welcomed the business support gifts from Norwegian Refugee council and promised to use it to better her business.

Leer County is one of the most conflict affected Counties in South Sudan with so many of its occupants displaced to some island areas of Adok port something that is presumed to have persuaded Norwegian Refugee Council to make this unexpected move to award cash jackpot to over 55 traders.